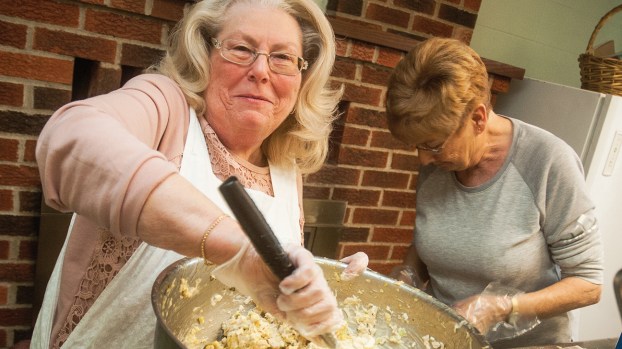 The Child Welfare Club had one its biggest fundraisers on Thursday.

Members of the group were at work at the Church of the Nazarene, preparing take-out and delivery chicken salad lunches, sold to businesses around the area to pay for the group’s activities.

Debbie Jones, president of the group, said the organization has a long history in Ironton.

She said the group contributes to local charities and drives, such as Backpack Buddies, the City Welfare Mission, Harvest for the Hungry food pantry and others.

The group also sponsors a scholarship at Ohio University Southern each year.

“It’s for single mothers, so they can provide for their children,” Gibson said.

Gibson said the group prepared 539 lunches for this week.

She said the group does three fundraisers a year, with the next one set for Thursday, April 12, which will be a sitdown luncheon.

Members will sell tickets to the vent, in which attendees can sample different items made by each member.