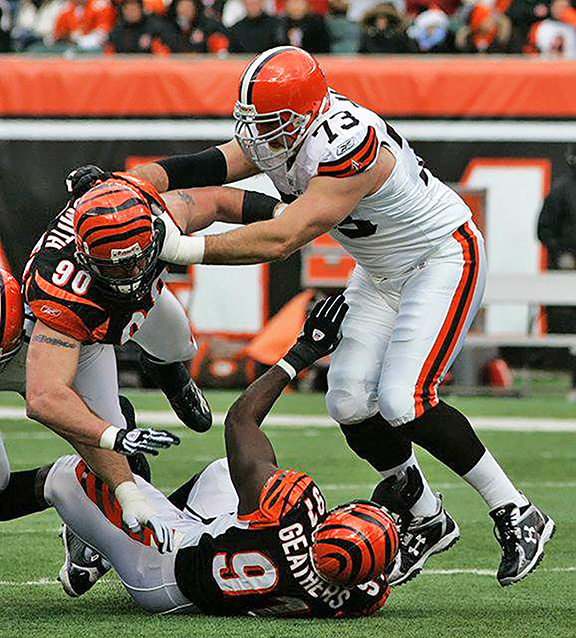 CLEVELAND (AP) — Nothing could keep Joe Thomas off the field.
The Browns’ sturdy left tackle never missed a game and never missed a single snap before a freak injury ended his 2017 season. And, sadly, his career.
The face of Cleveland’s franchise for more than a decade, and one of the best offensive linemen in NFL history, Thomas retired Wednesday after 11 seasons, ending a run exemplified by durability, dependability and dominance.
A 10-time Pro Bowler, Thomas ended months of self-reflection and speculation with a bow.
“This was an extremely difficult decision, but the right one for me and my family,” said Thomas, the No. 3 overall pick in the 2007 draft. “Playing in the NFL has taken a toll on my body and I can no longer physically compete at the level I need to.”
Few players have ever reached his level.
Thomas started 167 consecutive games and was on the field for 10,363 consecutive snaps before tearing his left triceps while blocking on a routine running play during an Oct. 22 game against Tennessee.
The sight of the 6-foot-6, 310-pound Thomas helplessly sprawled on the ground in pain was shocking to teammates, the Titans and Cleveland fans who had never seen No. 73 look so vulnerable.
He had been an iron man, football’s version of Cal Ripken.
But the severe injury required surgery and gave Thomas, who had fought through torn knee ligaments, ankle sprains and a sore back to play in recent years, more time to consider the next phase of life. And to reflect on a career that will one day lead to his enshrinement in Canton, Ohio.
“From the moment I was drafted, the city embraced me in a way that I could never fully describe,” Thomas said. “I am proud to call Cleveland home. The loyalty and passion of Browns fans is unmatched and it was an honor to play in front of them from the past 11 years. I would like to thank all of the coaches, teammates, staff, fans and everyone who has shown me support throughout my career.
“Even though I will be hanging up my cleats, I will always be a Cleveland Brown.”
After announcing his retirement, Thomas, who hosts a popular podcast with former teammate Andrew Hawkins, provided more details about his physical condition and the destructive toll that playing took on his body.
“As a competitor, you always think that you can still do it, but there a point in your career that you get to that crossroads and you say I just can’t do it anymore, I just don’t have it in my body,” Thomas said on “The ThomaHawk Show.”
“My mind is good, but my body is not willing, and I think that’s where I am. … As your body fills up with inflammation, your muscles shut down, it’s a protection mechanism that your body has. Specifically, in my knee, which is the main reason I feel like I had to retire.”
The loss of Thomas, who would have received a $3 million roster bonus on Sunday and had a $10.3 million salary for 2018, leaves a huge hole for the Browns on and off the field. Thomas was more than just an excellent player. Jovial with a Midwestern charm, he personified this blue-collar city: loyal, hardworking, reliable.
Owners Dee and Jimmy Haslam said Thomas’ playing streak — the number 10,363 — will be added to the team’s ring of honor at FirstEnergy Stadium this season.
Thomas is one of just five players selected to the Pro Bowl in each of his first 10 seasons, and the other four — Barry Sanders, Lawrence Taylor, Mel Renfro and Merlin Olsen — are Hall of Famers.
Easily the best player of Cleveland’s expansion era since 1999, he’s on the short list of the top players in the Browns’ storied history, a group that includes Jim Brown, Otto Graham, Ozzie Newsome and Lou Groza.
But for all his personal accomplishments and success, Thomas never got to play in the postseason. That wasn’t his fault.
The Browns have been in a perpetual cycle of chaos almost since Thomas was drafted on a day he chose to spend fishing with his dad on Lake Michigan rather than being with the other college stars at Radio City Music Hall in New York.
Thomas played for six coaches, at least that many offensive coordinators, and protected 20 quarterbacks during his 11 seasons. When he was featured in an ESPN documentary last year, Thomas incredibly named all the QBs he played with, a list that started with Derek Anderson and finished with DeShone Kizer.
Cleveland won 10 games in his rookie season but missed the playoffs, and never won more than seven games in any of his other seasons. In all, the Browns went 48-128 during his career.
But despite year after year of losing, Thomas never wavered in his commitment to the Browns or Cleveland. He’s the only player to earn the team’s Walter Payton Man of the Year distinction several times and Thomas was active with several area charity groups.
On Tuesday night, he spoke at an awards dinner for the Positive Coaching Alliance.
“When I hear a lot that stuff about my career, I have to pinch myself because I wanted to show up every day and do my job and be a good teammate, and then 11 years later I was able to rack up some impressive accolades,” he said. “So hopefully years from now when my kids grow up and think I’m a total jerk and telling me how much of a loser I am, I can say, ‘Well, I did win a Walter Payton Man of the Year a couple times.”’