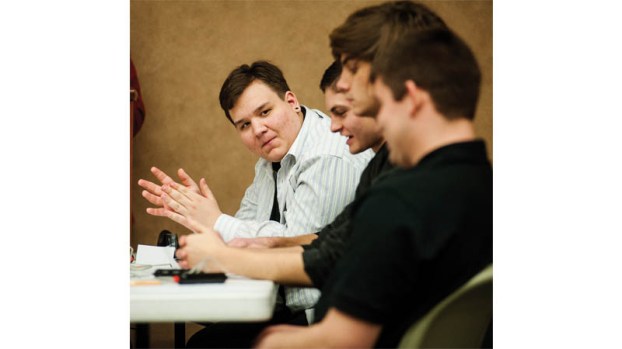 They could not have been more evenly matched.

Ironton faced off against South Point on Tuesday in the final round of the Ironmaster Quiz Bowl Tournament at Ohio University Southern, and it took two matches in the double elimination event and two tiebreaker rounds for a winner to be named.

After the rounds of questioning in the match, moderated by Fairland High school teacher Tim Hayes, with subjects ranging from history to math to the arts, South Point won the match by one point, putting the teams on equal footing for a second match.

However, this second faceoff did not end quickly. After the three rounds typical of a match, the teams were dead even in the score.

At this point, Hayes had to approach Julie Walters, of the ESC, to ask for an additional nine questions for a tiebreaker round.

After being asked about topics such as the author of “Pippi Longstocking,” the inventor of dynamite and the acronym of the National Transportation Safety Board, the impasse remained, with both schools scoring equally in the round.

After an additional eight questions, Ironton was finally able to move ahead, winning the match by two points.

The two teams shook hands and congratulated each other on a good game.

Ironton’s coach, social studies teacher, Mary Frances Gunderson, praised each of South Point’s players on the match and their abilities.

“This is a team whose faces I’ll remember,” she said.

Of Ironton’s victory, she said, “it feels terrific.”

“It’s a great team,” she said. “They work hard. They study hard. They’re very competitive and this has been one of their goals since the beginning of the season.”

She said it had been more than 10 years since the school won the county tournament.

Joan Hall, South Point’s coach, said it was “a hard fight” for team to reach second place, working their way back from the earlier defeat in the day and then holding out against Ironton for two matches.

“It took two ties to break it,” she said.

South Point, along with Chesapeake, entered the tournament with the best season record for school-to-school matches, with each at 6-1. With 312 total points, Chesapeake was named the regular season winner and their advisor, Gina Allen was honored as Outstanding Coach.

One player from each school was selected as an outstanding player, with Humphreys representing Ironton, Decker for South Point, Evan Goodall for Chesapeake, Gavin Jenkins for Rock Hill, Gunnar McClung for Fairland, Isaac Dickess for Dawson Bryant, Derik Brace for Symmes Valley and Dmitri Ward for St. Joseph.

Following the county tournament, the next level of competition will be Ohio Academic Competition Southeastern Regional, set for April 21 at Ohio University in Lancaster.

As regular season winners, Chesapeake will be eligible for the tournament, as well as Ironton for winning the Ironmaster.

KITTS HILL — Those applying for a hunting license for the first time got to take part in an all-day... read more