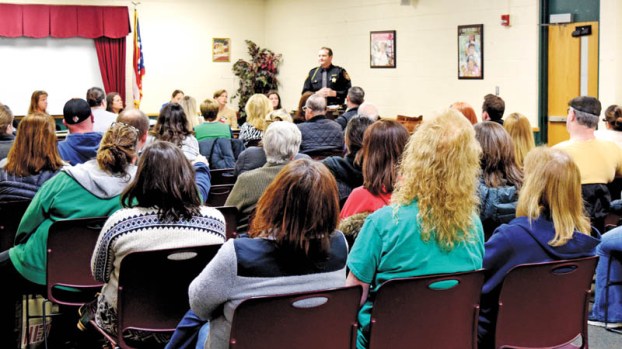 Sheriff Jeff Lawless addresses a meeting of the Parent-Teacher Organization at Fairland West Elementary on Tuesday to discuss security measures in the district.

ROME TOWNSHIP — A large group of parents gathered at Fairland West Elementary on Tuesday night to take part in a discussion, organized by the school’s Parent-Teacher Organization on school security and safety.

Fairland Superintendent Roni Hayes, Lawrence County Sheriff Jeff Lawless and Deputy Scott Wilson spoke on the topic, which has been in the headlines since the deadly shooting at a high school in Parkland, Florida last month.

“The most important thing we do in our school district is to keep our children safe,” Hayes said, as she reviewed initiatives that were currently in place, as well as those which are planned or under consideration.

Hayes pointed to the entry system of the school, in which visitors must use the intercom to have the door unlocked by a receptionist, then sign in upon admittance.

She said the school also has been coordinating with local police and deputies on safety concerns.

“We work with local law enforcement and follow guidelines for fire, tornado and lockdown drills,” she said.

Hayes offered suggestions for parents, such as keeping emergency information and contacts up to date with the school, as well familiarizing themselves with the school’s emergency notification methods, such as the One Call Now system and the district and school’s websites and social media.

She also said parents should discuss potential dangers with their children, as well as what to do if they are aware of a threat.

“Encourage children, when they hear of a threat — if they read stuff on social media — to report it to the school,” Hayes said. “We investigate any and all threats. We listen to children’s concerns and we take this seriously.”

She said, in light of a threat made against Fairland schools and the atmosphere after the Parkland shooting, the district had asked Lawless to have additional deputies available to patrol the district. Wilson is already a regular visitor to the schools and

Hayes said his presence is assuring to faculty and students.

She said the school has emergency plans in place, which are submitted to Ohio Department of Education and reviewed by Homeland Security.

“God forbid, if we were in a situation, we are prepared,” she said.

She said, in the event of an emergency, it is important for parents not to rush to the school to pick up children or jam the phone lines, which would be needed for emergency communications.

She said, in the event of an incident, the schools would disclose a pickup point for parents, once the sheriff gives an “all clear” and says the scene is safe.

Hayes said Fairland’s safety plans “meet or exceed what’s out there or mandated.”

She said the school is also looking into additional measures, such as door barricades for classrooms, and a film for the window at the entrance, which would make entry more difficult for an intruder.

“The film would be shatterproof, but not bulletproof,” she explained, stating that a person would have to chip away at it for some time to gain entry, giving the school time to lock down.

Hayes said the school board had also passed a resolution at its meeting Monday night, joining other districts in asking the Ohio legislature to allocate more funds toward school security.

Lawless assured parents that the district is emphasizing security.

“As a sheriff, I can assure you that Fairland schools are safe,” he said, adding that there are plans in place that are not disclosed for security reasons.

“We don’t want everything to get out there, so it can’t be used against us,” he said. “But the faculty and administration take this seriously.”

Lawless said the dilemma is “how to stop evil.”

“If someone is hellbent on evil, what can we do?” he said.

He said it is not practical to post a guard at every door or require every person to go through metal detectors, nor is it feasible with the budget of local school districts.

“We can never be 100 percent safe,” he said, stating there was no such thing as an “attack proof” facility.

“Even our military bases and law enforcement buildings have been attacked,” he said.

Lawless said all buildings are secured and locked after students arrive, and deputies routinely make visits. He said he has asked them, when they have free time on their shifts, to make an extra effort to stop by the schools.

He said, in the event of an incident, plans are in place for multiple law enforcement jurisdictions to respond. He also stressed parents should not try to get to the scene.

“We would have enough to deal with — we understand you love your child, but then we have to worry about you as well,” he said. “Give us room to work.”

Lawless spoke of the arrests made in recent weeks, when threats were made against multiple Lawrence County schools in the wake of Parkland.

“Making a threat is not a joke,” he said, stating three were arrested within five days of the threats, thanks to subpoenaing social media records. “If you make a threat, I’m going to put you in jail. If I feel you’re a threat and can come up with a charge, I will.”

Wilson spoke to the group about the ALICE program, which stands for “Alert, lockdown, inform, counter and evacuate.”

He said the emphasis has changed on the way faculty and students are taught to deal with emergency situations. At the time of the Columbine High shooting in 1999, he said the thinking was that everyone should lockdown.

Now, he said the method is for those in a “cold zone” of a building to flee if the shooting is confined to a “hot zone.” He said teachers and students are also instructed on possible ways to fight back.

Lawless agreed, saying that such measures have been “proven to work” and minimize casualties.”

“If you’re firing a gun and someone is throwing something at you, or people are running, it’s more difficult than you think,” he said.

The presentations were followed by a lengthy question and answer session with parents, in which concerns were raised for better communication and people asked how funds could be raised for more security needs. The need to address bullying was also raised, which Hayes and Lawless said is something that is receiving a stronger focus.

Hayes said she feels the legislature and officials will hear the call on funding.

“I think it’s coming,” she said. “They’re taking this more serious and want to make sure we have the resources.”

One of the parents at the meeting was Lawrence County Common Pleas Judge Andrew Ballard, who said parents and officials should not become complacent.

“If we set back and say we’ve done all we can, someone will try to prove us wrong,” he said.

The PTO plans to have another meeting on the subject at the beginning of next school year and will also discuss cybersecurity at next month’s meeting.