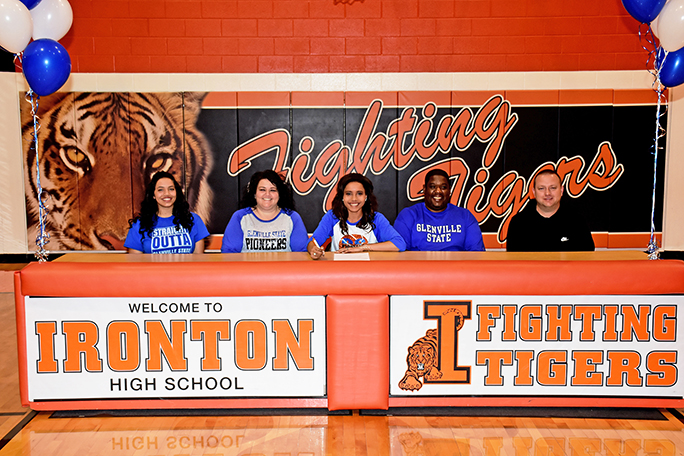 Lexi Wise likes to look good.
“Lexi would win the Gus Macker team championship and then win the best-dressed team. She’s a competitor and wants to win, but she likes to look good,” said Ironton Lady Fighting Tigers’ coach Doug Graham with a grin.
Wise had to smile at her coach’s comments.
“I knew he’d have to say something about that,” Wise said with a laugh. “Basketball games I knew I was going to get sweaty and all nasty. Basketball I didn’t worry about being too pretty. Now volleyball, I kind of liked being pretty wearing the bows and all that stuff.”
Wise looked pretty good to Glenville State University as the Pioneers signed the Ironton 5-foot-10 senior guard to a letter-of-intent to play basketball next fall.
During her four years as a starter, Ironton posted an 83-19 record with two district championships, one regional title, a state tournament berth, and the Lady Tigers won or shared the Ohio Valley Conference title three times.
“Most important I remember is that it’s more than just a game for me. It’s being part of something that’s bigger than myself. I’ve always been a part of a team. I got to be part of a Final Four team and play with Lexie Barrier. She was definitely a big inspiration for me,” said Wise.
“I’m really going to miss the memories of being on this court. I don’t know why, but there’s something about playing in this Conley Center that’s just unbelievable. When you go to other gyms you can’t just get an atmosphere like this. It’s equivalent to Waverly.”
Wise — who scored 1,019 points in her career — was a four-year starter and second team all-district. She averaged 14.0 points, 8.7 rebounds, 4.3 assists and 3.7 steals per contest. She also had more than 1,000 kills playing volleyball.
Wise was second team all-district this season and honorable mention All-Ohio in Division III.
“Lexi has been a tremendous asset to our program and our team starting back in the seventh grade and playing for coach (Mike) Freeman,” said Graham. “She does it all. Rebounding, handle the ball, score, defend the other team’s best player. She really does a lot with her talents.
“There are some areas she can improve on, but she’s smart, she’s athletic, she’s long so that causes a lot of problems for other teams offensively and defensively. Her offense has grown. That’s something she’s going to improve upon.”
Wise visited Ohio Dominican, Thomas More, Wilmington, West Virginia Tech and numerous other schools before settling on Glenville State.
“I went to Glenville and I waited two or three days and went to Ohio Dominican and it was like Glenville was home. As soon as I left I wanted to go back. The campus, everything. It’s just like Ironton. A small-town community and focused on basketball and that’s what I need.”
Glenville State finished 31-2 this past season as the Lady Pioneers lost to Indiana University at Pennsylvania in the NCAA Division II tournament.
“I love the style. It’s fast-paced. It’s everything I need to be on. I need to get out and go. You give me the ball and I get out and go. That was definitely the deciding factor, knowing their playing style and that I can get it and go,” said Wise.
“As for playing time, I feel I’ll get a lot there. I like it. I like the coaches. They’re so welcoming and they just seem like a big, ol’ family. I’m super excited.”
Graham agreed that Glenville was the perfect fit for Wise.
“Whenever this thing looked like it was going to happen more and more, I thought Glenville was the ideal place for her,” said Graham.
“She had some options to go some other places, but to me they play a lot of kids, they were 30-2, they were ranked in the top five in Division II and made it to the second round. Their style fits her perfectly. They play fast. I expect her to thrive there.”
Graham said Wise’s offense got better each year and she wants to continue to improve her offensive game from the perimeter.
“They get 1,000 shots up each week so I’ll definitely need get in the gym,” said Wise. “I definitely need to improve a lot on being able to come up off the dribble, shoot off the dribble.
“I knocked down a lot more 3-pointers this year than in my whole career. I got a lot more confidence. Coach Graham always told me I had the green light. He said shoot it, score, get the and one, whatever I need to get the job done.”
Wise added that Graham was a driving force in her success at Ironton and reaching her goal of playing college basketball.
“Coach Graham is going to laugh, but definitely I’m going to miss him. He pushed me until I thought I was going to cry. He’s definitely tested me to see if I had the ability to continue on in college basketball,” said Wise.
At Glenville State, Wise plans to major in nursing which is a difficult curriculum for someone playing collegiate athletics.
“It’s going to be a challenge. Two or three people on the team are majoring in nursing and it’s definitely something you have to keep your eye on the prize. My sister (Macy) is in nursing and I get a glimpse of what it’s like. It’s going to be tough. She has commitment with it and she doesn’t even play sports,” said Wise.
“I’ll have to learn being a student-athlete and know I’m a student first and then I’m here to play basketball, too. I know it’s going to be hard. I hope I can get a degree in it.”
Lexi is the daughter of Ra’etta Wise and Todd Williams.