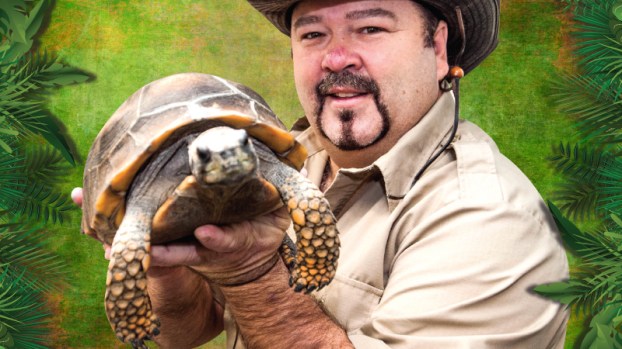 Dr. Des Covery is the name used by Gary Bussa, of Greenup County, who said he has 25 animals at his home that he uses for shows.

“I’ve been to different continents and seen special places,” he said of the hunt for creatures he was about to present to them.

Dr. Des Covery is the name used by Gary Bussa, of Greenup County, who said he has 25 animals at his home that he uses for shows.

Bussa, 47, began the presentation by bringing out a few Madagascar hissing cockroaches.

A few inches long each, they emit a their distinctive sound to scare off predators, he said, as he invited the children to touch them.

While some eagerly did so, a few were reticent and were content just to look.

Next, Bussa brought up the mother of one of the children for a surprise. Standing behind her, he placed Dirt Harry, a tarantula he gathered in Mexico, on her shoulder.

Bussa said he gave the arachnid its name because of the needle-like hair covering its body.

“Do you like milkshakes?” he asked the children. “What’s your favorite kind?”

After a few children yelled out flavors, Bussa told them Harry enjoyed a cricket flavor, using his fangs to suck out the insides of the insects when he catches them.

Bussa then brought out Beardie, a bearded dragon he said he rescued from a family who was having difficulty caring for him.

“They couldn’t get him to eat,” he said. “So I got him and had him eating again.”

Lastly, he brought out two snakes — Oreo, a brown and white King Snake, followed by Rocky Balboa, a large boa constrictor, which he invited the children and parents to hold as he stretched him out.

Bussa, who serves on the board of the Highlands Museum, said he has been working with animals for about 13 years and currently has many reptiles, amphibians, ferrets and parrots, which he takes to schools and other events.

He said he lived across from the Columbus Zoo for 13 years, where he worked in the petting barn and helped with shows and got a first-hand education on animals, which had always interested him.

“They put you in every area,” he said. “You know many species, how to care for them and how to feed them.”

Bussa alternated between working with animals and doing work as a police officer. In addition to the zoo, he also worked on shows at the Fort Lauderdale Museum of Discovery and Science.

About 10 years ago, he moved to Ashland, after his wife graduated with a pharmacy degree.

“There wasn’t anything for me,” Bussa said of the area, as far as zoos were concerned and found that no local museums had animals.

He said he applied with the Kentucky Division of Wildlife and got insured before launching his business, Des Coveries Education and Entertainment, locally.

“I originally created it for schools and to do school programs,” he said, adding that he geared the shows toward the curriculum. “I would talk to them in advance and they would let me know what they are teaching.”

He said he has expanded to birthday parties, churches and business events and does shows for children of all ages, as well as adults.

He said he is hoping to expand to something “cute and cuddly” soon, and is planning to get a permit for mammals this year.

Bussa said people are often surprised to learn of a company of his nature operating in the area.

“They always say to me, ‘I didn’t realize we had anything like this around here,’” he said.

In addition to his live shows, Bussa said has also worked locally with MyTown TV to create an animal series.

“We’ll have six or seven episodes over the next few months,” he said.

He said he loves his work and the joy it brings to others each time keeps it fresh.

“”I’ve been doing this so long, but I never get tired of it,” he said.