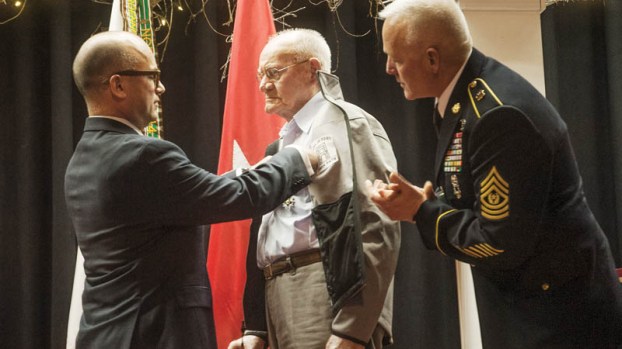 OLIVE HILL, KENTUCKY — “Are you here for Jack?” the cashier at the BP station on U.S. Route 60, leading into Olive Hill, asked on Wednesday.

At 98, Jack Baker is well-known in his Carter County hometown, and the staff spoke of how he gets up at 5 a.m. every day and takes lengthy walks, still cuts his own grass and is looking forward to another season of fishing in the waters of Tygarts Creek, where his white pick-up truck is a familiar site parked on the bank.

“He said he’s ready to get his license renewed this year,” the cashier said. “He’s a wonderful man.”

Baker is known around Olive Hill for his humble nature, which made the honor he received this week even more special.

Drafted into the U.S. Army in 1943 at the age of 25, he took part in the June 6, 1944 D-Day landing of Allied forces in Normandy, France, the first operation in the liberation of that nation from occupation by Nazi Germany.

From there, as a member of the First Army, Baker fought in every major Allied battle in the Europe Theatre, including Aachen, Hergan Forest and the Battle of the Bulge.

As part of the 100th anniversary of the First Army, officials in field army have been reaching out to veterans and honoring them.

Baker’s grandson, an Air Force historian, brought his story to the First Army’s attention and, last year he received the French Legion of Honor, the most distinguished recognition in France.

On Wednesday, officials from the French government joined top army generals in formally presenting the award to Baker at a ceremony at the old Olive Hill High School.

Hundreds filled the room, including family and friends, neighbors, cadets from JROTC and ROTC programs from nearby high schools and universities, the Daughters of the American Revolution and local officials, such as Olive Hill Mayor Jerry Callahan, who brought a proclamation from the city council proclaiming Wednesday as “Jack Baker Day.”

Following the playing of the United States and French national anthems, a short video was shown detailing Baker’s service.

In the interview, Baker said he never got over the horrors of the concentration camps he entered, seeing the remnants of the crematories used to gas Jewish prisoners.

Due to a clerical error, Baker was never sent to basic training, and after being drafted in Olive Hill, went straight to work as a mail clerk for the army in New York, before being shipped off to Europe.

Speaking on behalf of the First Army was Lt. Gen Stephen Twitty, its 38th commander.

“The reason why it’s great to be here is, as I look around, there more veterans here than just Jack Baker,” Twitty said in his opening, asking those who served to stand.

“Check that out,” the general said, as a good third of those seated in the front several rows stood. “The history in this room is staggering.”

He said Baker’s story was a perfect representation of the First Army’s history.

“As we studied Mr. Baker’s service, it became evident that he had been in every place and battle that defined the First Army’s history in World War II,” Twitty said.

Twitty noted that, following the Allied victory in Europe, Baker was due to be shipped to the Pacific on the day that imperial Japan surrendered, ending World War II.

He said Baker then returned home, where he resumed his life as a carpenter and raising a son with his wife.

“A whole generation of Jack Bakers did just that,” Twitty said. “They answered the call of duty, went on to victory, then came home and got back to work, with no fanfare.”

Twitty concluded by quoting President Calvin Coolidge who said, “A nation that forgets its defenders will itself be forgotten.”

“We will never forget what men like Jack Baker did for us,” Twitty said, noting that in meeting Baker, the veteran said he did not deserve anything special and was shocked by the turnout.

Twitty responded by saying that Olive Hill reminded him of his small hometown in South Carolina, where three things come first: “God, family and country.”

“”I’m not shocked,” Twitty said of the attendance. “It’s exactly what I expect from a place like Olive Hill.”

Baker was presented with the Legion of Honor by Guillaume Lacroix, the consul general of France in Chicago.

Lacroix said he was there “to thank Jack Baker and, through him, all veterans, who helped my country be what it is today — free, independent, democratic and peaceful.”

“We share your values,” Lacroix said of the alliance between France and the United States.

He noted France is the only European power not to go to war against the U.S. and that the centuries of friendship between the two nations dates back French assistance to the colonies in the war for independence against Great Britain.

After receiving a plaque and having medal pinned on him by Lacroix, Baker took the podium and thanked the crowd.

“I want to thank everyone in Carter County,” Baker said. “And I want to thank the gentleman from France for coming here to give me the Legion of Honor.”

Owner says closure may not be permanent Frogtown USA, a staple in the Ironton community, announced on Monday that it... read more