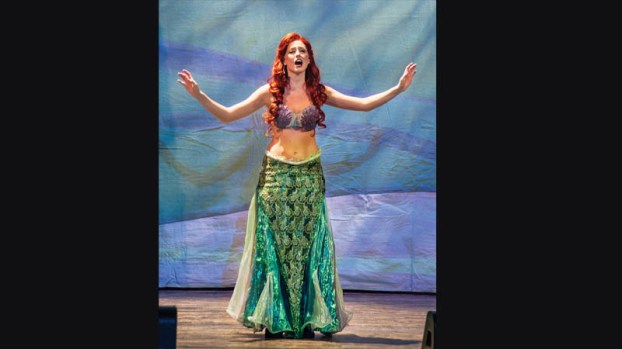 Sarena Johnson sings “A Whole New World” as the character Aerial in the production of The Little Mermaid by the Paramount Players.

Paramount Arts Center to present ‘The Little Mermaid’ this weekend

ASHLAND — The Paramount Players will take families and the audience “Under the Sea,” beginning tonight at 7:30 p.m.

The two-day run of “The Little Mermaid” will take place at the Paramount Arts Center, featuring one of the largest casts and most technically ambitious productions the group has done yet.

Based on Walt Disney’s adaptation of the Hans Christian Anderson story, the musical show will run about two and a half hours.

Sarena Johnson, of Huntington, of the St, Mary’s Medical center nursing program, will star in the lead role as Ariel. She’s a veteran of numerous Paramount productions, having played the lead in another Disney adaptation, “Cinderella,” earlier this year.

A number of Lawrence County residents and natives will be a part of the show, including Rick Payne, who stars as Sebastian and handled costume design, Gary Morgan, as a sailor, and Courtlyn Lewis and Alex Wilson as seagulls.

Melanie Cornelison-Jannotta is the director of the production, Josh Janotta, of Ironton, is musical director.

The show boasts many large scale numbers, such as “Under the Sea,” Janotta points out that as many as 100 are on stage.

Disney’s 1989 film of “Mermaid,” kicked off what is known as the “Disney Renaissance,” restoring the studio to critical acclaim and box office success after sliding behind other animators, such as Don Bluth, in the 1980s.

“The Little Mermaid was the first to introduce the songs of Alan Menken and Howard Ashman, who would be key to the studio’s comeback. The Paramount production features their work, as well as addition new musical numbers.

The show will also take place on Saturday at 3 p.m. and 7:30 p.m. Tickets are $30 for adults and $15 for students if purchased in advance, and an additional $2 if purchased at the door.

Tickets are available online at www.paramountartscenter.com or by calling the box office at 606-324-0007.

For more photos, see the Focus page in The Weekend Edition of The Tribune.