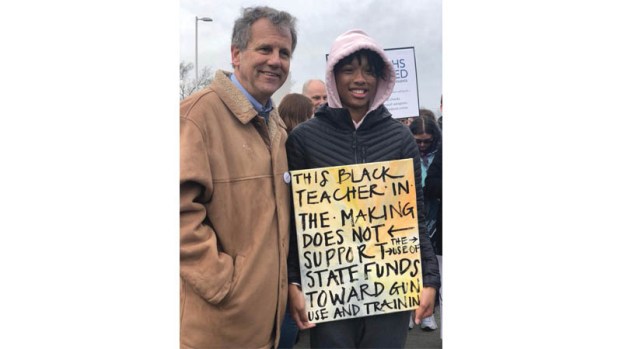 U.S. Sen. Sherrod Brown, D-Ohio, stands with a activist, identified as Noa, at the March for Our Lives event in Columbus to rally against gun violence.

Senator spoke at Ohio Statehouse during Columbus march on Saturday

COLUMBUS — U.S. Sen. Sherrod Brown, D-Ohio, joined with activists across the country on Saturday in calling for elected leaders to take action in reducing gun violence.

The “March for our Lives” took place on the National Mall in Washington, D.C. over the weekend, organized in the aftermath of a deadly school shooting in Parkland, Florida last month.

Survivors of the Parkland school, who have been active on the issue and in the media in the weeks following the shooting, spoke at the Washington event, which was estimated to have drawn hundreds of thousands.

Across the country, satellite marches and rallies took place in various cities. Brown attended the march in Columbus, along with his wife, journalist Connie Schultz, and chronicled the events live on his social media pages.

As the march progressed, Brown posted statements and photos from those in attendance, such as a woman, identified as “Noa,” who said he plans on a career in education.

“I’m going to be a teacher and I don’t want to have to be armed to protect my students,” Brown quoted Noa as saying. “I want to make a difference in children’s lives, and ensure through my work that they can go on to be good, productive citizens.”

Brown also shared the words of “Karilyn,” a physician, who was attending with family.

“As a doctor, I see unpreventable tragedies that claim lives every day,” Brown quoted her as saying. “I am marching because mass shootings do not belong on that list, and as a mom, I refuse to let my daughter grow up in a world where she has to live with that fear.”

Brown had words of praise in particular for the high school students involved in the marches.

“I am so proud of students in Columbus, Cleveland and Cincinnati, Dayton, Toledo and all over our state and all over our country, who are standing up for safe schools and for a safer country,” he said in a video posted to Facebook. “What they are doing really matters, I think.”

Brown marched with the activists and spoke on the steps of the Ohio Statehouse, where he talked about efforts on gun control he has worked on with U.S. Rep. Joyce Beatty, D-Ohio, who represents the Columbus area.

“For years, Joyce Beatty and I have been fighting against the gun lobby,” Brown said. “And for years, we’ve tried to get Republicans to help us. This year, because of you, it’s going to be different.”

Brown said he and Beatty have sought a ban on assault weapons, as well as blocking those on a terrorist watch list from purchasing firearms.

“If you are on the terrorist watch list, you go out to John Glenn Airport, you can’t get on a plane, but you can still buy a gun?” he said. “How stupid is that?”

Brown also called for universal background checks and a ban on bump stocks, which can be used to modify firearms to fire like a machine gun.

The issue of gun control will likely be topic throughout the year, as Brown faces the voters in November in his bid for third term.

In the Republican primary, candidates have been speaking of their credentials on gun ownership issues.

All three Republican candidates have touted their stance on the second amendment and support for gun ownership and conceal carry laws.

‘The Bar’ takes over former Eagles space in Ironton

One of the newest businesses in Ironton, The Bar on 3rd Street, opened on Feb. 14 this year, and co-owner... read more