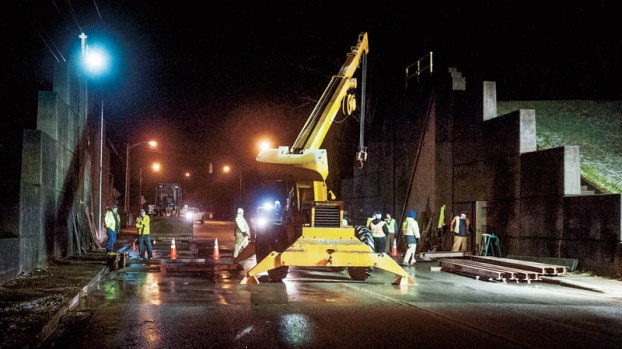 City of Ironton work crews the beginning stage of erecting the flood wall on North Second Street on Feb. 18 as floodwaters from the Ohio River reached 50 feet. The City of Ironton has applied to FEMA to be reimbursed for worker’s wages during the emergency.

Asks FEMA to help with expenses

At Thursday’s Ironton City Council meeting, Mayor Katrina Keith said that they have put in a request for around $31,000 to expenses related for the recent high flooding to the Federal Emergency Management Agency.

The city put up a couple floodwalls, had to run pump stations and pay for overtime for the city crews that had to work numerous hours to deal with the situation.

“We will be getting reimbursed, definitely,” she said. “We did submit for the gear switch that blew up but because it is part of the U.S. Army Corps of Engineers, we’re not sure if we are going to get that back.”

She said there is going to be an economic development meeting on April 4 at the Holiday Inn and the topic of conversation will be re-branding the city.

“We are pulling everyone together that we can, to re-identify ourselves, identify some assets we have that we can capitalize on,” she said.

Keith said the new coalition of Ironton business owners is coming along nicely.

“I’m very pleased with that,” she said. The group, which doesn’t yet have a name, will meet again on Tuesday at 5:30 p.m. at the Ironton City Center.

She said this year, the city will be partnering with Ironton in Bloom in the effort to put in trees and flowers to make Ironton look better.

“It is very costly,” Keith said. “I don’t think people know how much it takes to do that project.”

She said Ironton in Bloom is going to pay the Recreation Department, instead of an outside entity, to hire two people to keep the flowers watered.

“They have developed a plan we will follow,” she said.

A returning topic of conversation was three proposals to put a $5 tax on every licenses vehicle and trailers in the city. Keith and Councilman Nate Kline recently did a Facebook video explaining the permissive sales tax and that it would go only to repair and maintenance of the city streets. Keith said she asked for comments.

“I was pleasantly surprised with this, I thought it would be 100 percent ‘You guys are crazy, no,’ but it wasn’t like that,” she said, adding that most people seemed supportive if it meant roads were going to be fixed.

Kline said that once it was explained that the money was used only for roads, not for equipment or other projects, people seem to be positive about it.

The three proposals got second readings. At the next meeting, the council will have the third reading and vote on whether to pass the ordinances.

The zoning of Parcels of property on the 300 block and 400 block of South Eighth Street have petitioned to have the zoning amended from R-3 to B-3 in order to support Phase 2 of the Gateway Centre development was sent to the Planning Commission for discussion.

The council voted to submit an application to the state for Economic Development Community Block Grants for the Gateway Centre development for the city to work on street and parking infrastructure to include the building of a Marriott Town Suites across the Gateway Centre.

The Public Utility Committee will meet at 4:30 p.m. on April 12, before the regular council meeting at 6 p.m.

WASHINGTON, D.C. — Ohio’s two U.S. senators announced this week that funding has been approved for anti-opioid mesures they have... read more