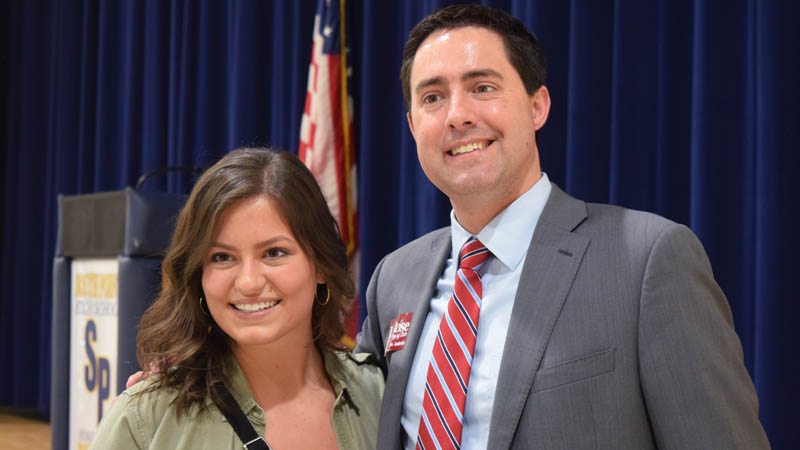 SOUTH POINT — The Republican candidate for Ohio Secretary of State made his case to members of Lawrence County’s Republican Party on Monday.

State Sen. Frank LaRose is on a tour of southern Ohio and spoke at the Lincoln Day fundraising dinner of the Lawrence County Republicans at South Point High School.

A veteran and Bronze Star recipient for his service in Iraq, LaRose’s tour of duty also took him to Kosovo, Africa, Oman and the U.S. Mexican border.

“I saw people vote for the first time in Iraq and Kosovo,” he said. “Elections are a very powerful instrument and sometimes people don’t bother to show up here.”

He recalled the purple ink which coated the fingers of those who voted, as proof they had been through the process. He said the purple fingers made the voters a target to those who opposed the elections, in which both men and women were allowed to vote.

“Would you believe in that election, in which people were threatened with violence and death, more 70 percent voted,” he said. “It was an act of courage to vote.”

LaRose is unopposed in his party’s May 8 primary and will face Democratic state Rep. Kathleen Clyde in the general election this fall. The current secretary of state, Republican Jon Husted is term limited and can not seek re-election.

LaRose said it is “easier now to vote” than ever, but that has not translated into higher turnout in the U.S. and Ohio.

“There’s no linear connection between convenience and turnout,” he said, stating that what drives voters to the polls is a competitive race.

He said the way to make races more competitive is to push for redistricting reform, which has protected incumbents by shaping districts to protect parties and incumbents.

LaRose said he has also sought to make voter registration easier, introducing a bill in the state senate to make it possible to register online.

“You register to vote on your smart phone or computer,” he said. “You don’t have to fill out and send in forms.”

LaRose said he has worked on other election-related bills as a senator.

“I was the only veteran in the state Senate and Jon Husted asked me to partner with him,” he said of an effort to improve voting procedures for military personnel overseas.

LaRose said he worked with Husted in passing a bill to remove noncitizens from the voter rolls, and that he has also sought to improve the infrastructure used to carry out elections, allowing counties to receive new voting machines.

LaRose said his bill, which he expects to pass the Senate in two weeks, would spread $114.5 million throughout the state, in a partnership with states and counties.

He said the decision would be left up to counties as to what form of voting equipment they would want to use, such electronic machines or optical scanners, so long as they met a requirement for a paper trial for auditing elections.

He says he wants to streamline the process for new business filings, while making the process more automated and keeping costs low.

“What can be more quintessentially American than starting your own business?” he said.

LaRose said he has also introduced legislation to bring back business courts, which he said would have a docket exclusive to that area.

“The judges would have special qualifications in business,” he said, noting that efforts have been made in the past to brings the courts back, but have failed.

He said such measures could make Ohio more business friendly and cited the state of Delaware as an example, where business filings are easier and methods are in place to resolve disputes.

Also speaking at the dinner on Monday was U.S. Rep. Bill Johnson, R-Ohio, who has spent the last week in the Lawrence County area.

Johnson’s speech implored Republicans to turn out in November for the midterm elections, as he said, historically, the party in the White House loses a large number seats in the first off-year election, and the same could happen to Donald Trump.

“This is a critical election and you need to come out,” Johnson said, telling the crowd that U.S. Rep. Nancy Pelosi, D-California and U.S. Sen. Chuck Schumer, D-New York, could become the leaders in each chamber of the Congress.

“The president loses an average of 32 seats,” Johnson said. “History is not on our side. Nancy Pelosi could be speaker again”

He said his party in Congress is solidly behind the president, and disputed media reports that said there was dissension.

He also pointed out parts of the omnibus spending bill, recently passed by Congress and signed into law by Trump, which he said would appeal to conservatives and to Lawrence County residents.

“Infrastructure is important to our district, and $21 billion for infrastructure was included in this bill,” he said.

He also said $4 billion was included for combatting the opioid epidemic and $15 billion for construction of a wall on the border with Mexico.

State Sen. Ryan Smith, R-93, was also on hand, and spoke of the $1 million in grant money recently secured for projects in Lawrence County, including a new senior center at the Lawrence County Fairgrounds and an EMS station for the eastern end of the county.

“We were delighted to get that through,” Smith said of the legislation, which will go to Gov. John Kasich for approval.

He said $100 million had also been pledged to expand broadband service in southeast Ohio.

The Lincoln dinner takes place each spring and serves as one of the county party’s biggest fundraisers.

Jason Stephens, who served as chair of the executive committee, said the party is considering plans for another big event in the fall leading into the November election.

“We’ve got a lot of good folks here tonight,” he said, pointing out the candidates and officeholders in the audience. “Thanks for coming out and for your support of the Lawrence County Republican Party.”