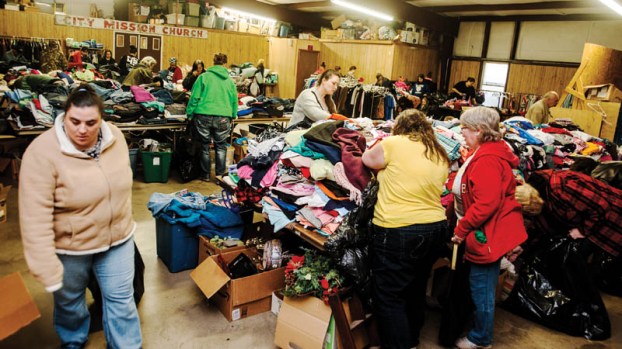 People gather at the City Welfare Mission to browse through clothes during one of its giveaway events Wednesday in Ironton.

For over seven decades, the City Mission Church has been helping those in need.

On Wednesday, the church had one of its monthly clothing giveaways.

“We average about 100-125 families a month coming through here,” said pastor and director Jeff Cremeans. They give out clothes on the second and fourth Wednesdays of the month. He said that all the items are donated. “We jog around Ironton, South Point and Coal Grove getting them. We’re in a good area, people like to give and we appreciate it so much.”

There were about 10-15 volunteers helping out with the clothing giveaway in the Mission’s hall. There were also toys for the kids and random books and household items.

Cremeans said it is the volunteers who help keep the Mission going.

“We couldn’t do it without them,” he said, adding that they have a dedicated group of volunteers who help out a regular basis and the Mission is one of the few places where people want to volunteer, but they have to turn them away. “We’ve had people who have come in for years and give their time like a full-time job. It makes it nice, because you can depend on them and you know they are going to do a good job.”

The City Mission has a number of ministries including lunch at 11 a.m., Monday-Friday, giving away furniture, a food pantry and its recently renovated homeless shelter.

“People only think about the Mission at Thanksgiving and Christmas time,” Cremeans said. “But we are here all the time, especially with the shelter being open seven days a week. So we are here everyday, doesn’t matter what holiday it is, there is something going on here.”

Brother Raymond Lightner started the City Mission in 1944 and Cremeans said its mission has never changed.

“’The door of hope to the unfortunate’– That’s our motto and that is what we do,” he said.

And in all those decades, there has only been three pastor/directors. Lightner ran it until his passing in 1967. Cremeans’ father, James, took it over and ran it until he stepped down in 2005 and then Cremeans took it over.

“Dad was, to many people, the face of the Mission and they thought he started it,” Cremeans said, and then laughed. “He was only five when it started.”

“We appreciate what people do,” Cremeans said.