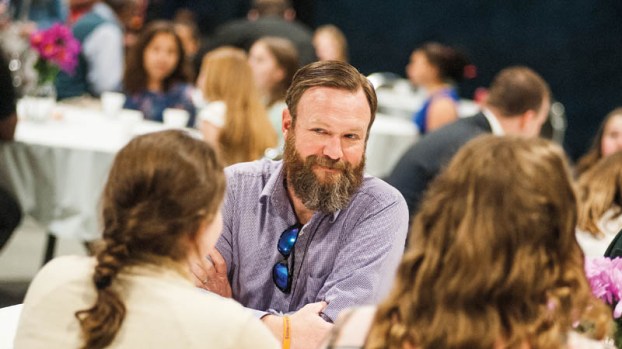 Students put new skills to use

Thursday was the culminating event for Ironton Elementary’s Ladies Academy.

The 50 girls had a luncheon at the Nazarene Church to use the skills they have learned over the past few weeks. They dressed up in semi-formal wear and had lunch with members of the community including police officers, the sheriff, fire fighters, businessmen and Bikers for Christ members. The goal was to be confident in social settings and when meeting new people.

IES Assistant Principal David Ashworth came up with the Gentleman’s Academy program, which was so popular that continued again this year. And there was a demand for similar program for the female students.

“The academy is phenomenal, I am not as hands on with this one as I was with the Gentleman’s Academy,” he said. He turned the program over to Impact Prevention, which already works in the Ironton Schools teaching life skill classes.

Haley Shamblin, a prevention specialist with Impact Prevention, helped run the Ladies Academy and said they have covered several subjects including flag etiquette, communication skills, being confident, how to shake hands, cooking skills, sewing skills, basic tool use and how to check air and oil pressure on cars.

“They loved working with tools,” she said. “It has been an awesome few weeks, I’m glad I could be a part of it.”

Hugh Scott volunteered to come in for both academies and said it was important to help build foundations for the oncoming generation.

One of the Academy members sitting at Scott’s table was fourth grader Joyce Lewis-Jones.

“I joined the Academy because I wanted to learn how to be a lady, so when I get older, I will not act like a wild, crazy animal,” she said, adding she did not have a favorite part of the Academy. “I love everything about it. It is really fun.”

Kaegan Henderson, a fifth grader, joined the Academy so she could learn new skills.

“My favorite part has been, probably, the beauty class,” she said.

“I thought it would be a good experience to learn lady-like things,” she said, adding her favorite part was the carpentry. “I got to learn how to nail boards together and how to use a drill. I just liked that stuff.”

Ironton Schools Superintendent Dean Nance attended the luncheon as a guest. He said he thought both academies were a great thing. He said that Ashworth recognized early on that they were a lot of skills that students used to get at home, but now they didn’t for whatever reason. And he thanked the volunteers who helped teach the students.

“It has been a great thing,” he said. “I hope it continues.”

For over seven decades, the City Mission Church has been helping those in need. On Wednesday, the church had one... read more