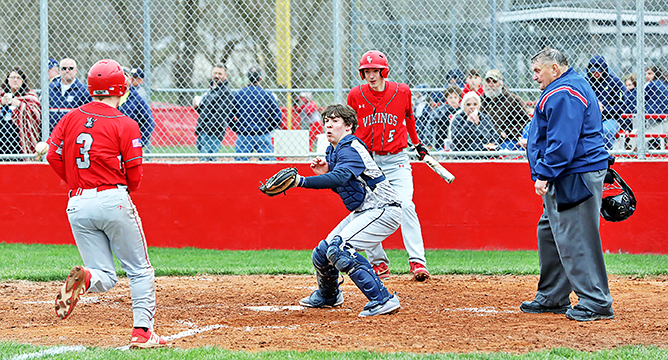 Symmes Valley Vikings’ Derik Brace (3) is safe at home as the ball hits off his elbow in a win on Monday against Portsmouth Notre Dame. (Photo Courtesy of Tim Gearhart)

AID — Pitch, hit and field.
Those three things make up the game of baseball and the Symmes Valley Vikings did all three things well in a 12-2 six-inning Southern Ohio Conference win over the Sciotoville East Tartans on Tuesday.
Nick Klaiber handled the pitching as he struck out eight, walked four and gave up six hits. Derik Brace went 3-for-3, Layken Gothard 2-4 with a double and Brock Carpenter 2-4 as the Vikings got 10 hits.
“Klaiber threw strikes and we played good defense behind him and we got some hits. If you do that, you can win some games,” said Vikings’ coach Chad Renfroe.
East got a run in the top of the first but the Vikings came back to take the lead for good with two runs.
Gothard and Brace singled, Griffin Hill walked and Austin Mannon had a two-run single.
The lead went to 5-1in the second inning.
Gothard walked, stole second and Brace singled. Brace stole second and Klaiber singled for a run. The final run scored on Hunter Adams’ fly ball.
East got a run in the top of third but the Vikings scored two runs in the bottom of the inning.
Brock Carpenter singled, Gothard was safe on an error and Brace had an RBI single. Klaiber walked and Adams was hit by a pitch to force in a run.
The Vikings scored in the fifth on a single by Wilson, a wild pitch, a passed ball and Brace’s sacrifice fly.
Symmes Valley ended the game with four runs in the sixth.
The Vikings used four walks and an RBI single by Carpenter and a two-run double by Gothard for their rally.
Symmes Valley visits Portsmouth Notre Dame on Wednesday.
Sciotoville    101    000    =    2    6    1
Sym. Valley    232    014    =    12    10    0
T. Winston and Lambert. Nick Klaiber and Derik Brace. W-Klaiber (K-8, BB-4, ER-2). L-Winston. Hitting-East: Bailey 1-3 2B, T. Winston 1-2, Queen 2-3, K. Winston 2-4; SV: Layken Gothard 2-4 2B, Derik Brace 3-3, Nick Klaiber 1-3, Austin Mannon 1-3, Brock Carpenter 2-4, Keifer Wilson 1-3.