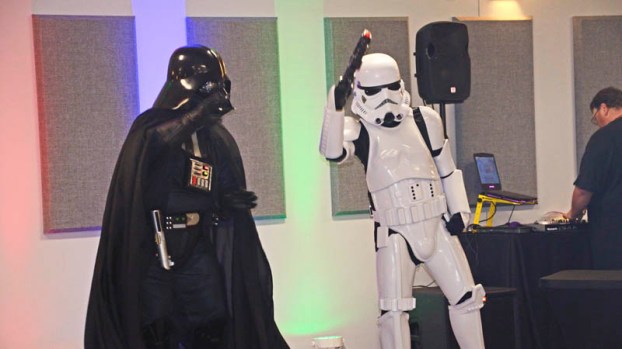 Darth Vader and a stormtrooper get down during a dance party, with music by “DJ Darth Vader,” to close out Highlanders HeroCon 2018 at the Highlands Museum and Discovery Center in Ashland on Saturday evening.

ASHLAND — Boyd County was definitely safe from the schemes of any super villains over the weekend, as two events drew heroes of all kinds downtown.

Vendors, inflatables and a car show were set up along the street and many downtown businesses kept later hours than unusual to greet the attendees, who came out, despite what looked to be oncoming bad weather.

There were many activities for children, including superhero cape making, face painting, tech gadgets and more, organized by the Boyd County Library and First Presbyterian Church.

For adults, there was a beer garden and an outdoor stage, where Rob McNurlin, a musician from eastern Kentucky, performed classic country hits by artists like Johnny Cash and Buck Owens as well as his own original songs.

But the evening was centered around superheroes, cartoon characters and science fiction, with the main event being a costume contest.

Two categories were created, for children and adults, who stood before a panel of judges, depicting characters such as Superman, Wonder Woman, Scorpion from “Mortal Kombat,” the Joker and his girlfriend Harley Quinn, who was a choice of three of the entrants.

Springer, who portrayed a humanized version of the sketchbook, named “Paige” by fans of the show, told the judges of her effort.

“I made my costume myself,” she said. The judges then asked for a show of hands of who handcrafted their outfits and about half of the participants responded.

Springer took home the top prize of $200, while second place went to Addison Fisher, as Walt Disney’s version of Snow White, and third went to Amy Price, as Raven from “Teen Titans.”

First Friday’s comic theme served as a lead-in to the Saturday’s Highlanders HeroCon 2018 at the Highlands Museum and Discovery Center.

Tia Rumbaugh, director of marketing for the museum, said this is third time they have hosted the event.

“It’s been going since 2015, and we had it in 2016, too,” she said, adding that the event came together thanks to the work of two former Highlands employees, Darrell Akers and Emily Roush.

“We have a variety of community partners for this,” Rumbaugh, who began at the museum earlier this year, said. “We work with the teen program at the library. It’s great to be able to partner with them and other.”

Around the room, vendors were set up, including Ashland comic and toy store The Inner Geek, Ironton’s Goblin Traders, fan groups like the Kentucky Star Wars Collectors Club, local artists, restaurants like Jimmy Johns and local writers like Cammie Eicher.

“I do about seven to nine of these a year,” he said of conventions, noting that he has been writing for about 48 years.

Stockum, who works as an attorney “during the day,” has a doctorate in biology and practices environmental law. He also does acting and performs as a musician.

He said he writes three kinds of books: pure science, such as “The Wonder of Natural Life in Kentucky” and others, such as those he uses as textbooks in his class; fiction science, which he describes as “creative fiction, with a science approach;” and “magic realism,” such as “The Markman’s Home,” released last year, which he sets in “post-apocalyptic Kentucky.”

He maintains a presence on Facebook and his books are available on Amazon.

Another booth at the con allowed visitors to partake in cosplay and dress up like a number of characters for photo shoots.

In addition to the vendors, the show had a costume contest and several activities throughout the day, such as a Q&A with local radio personality Clint McElroy, lightsaber battles and panels on subjects including publishing and costume design.

The event wrapped up with the entrance of Darth Vader and a stormtrooper, who began breaking out their moves as part of the performance from “DJ Darth Vader,” who invited the crowd to join in for a dance party.

The next event at the museum is set for 10 a.m. Saturday, April 14, when a grand opening will take place for the Smithsonian exhibit “Hometown Teams: How Sports Shape America.”

First Friday will continue each month through the fall. For more information, visit www.ashlandinmotion.com.

The spring rains continue to flood parts of Ironton as the rainy season drags on. On Thursday, city flood control... read more