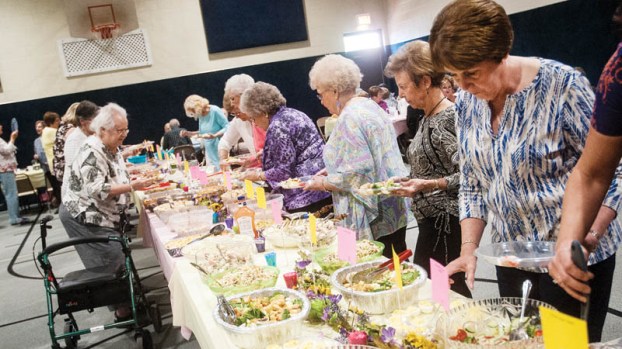 On Thursday, the Child Welfare Club had its annual spring salad luncheon, one of three events it hosts throughout the year to raise funds.

The money from the event goes to support the donations to several local groups.

Some 130 members and guests paid $10 to eat from a wide variety of salads and to socialize with their friends.

“Each of us made two salads and we are having a salad buffet with 28 different types of salads,” said Carol Allen, who has been a member of the Child Welfare Club for many years.

The event is one of three fundraising events that the club has every year. Club members used to make chicken salad sandwiches for carryout orders and then have the salad luncheon, but it was changed to two separate events a few years ago.

“It was so much work,” said Debbie Jones, the president of the Child Welfare Club. Club members had to get there at 7:30 a.m. to make the sandwiches and get ready for salad luncheon. “We had to get everything done by noon and then put on a program and we all felt half-dead because we had been working so long. It was easier to split them, so we could enjoy it more.”

Madolin Blackwell said now, the spring salad luncheon is one of their favorite events of the year.

“We love seeing everyone after being cooped up all winter,” she said.

The Child Welfare Club was founded in 1918 and times were tough in Ironton. The club started as a way to make sure that area children had basics like milk. Over the years it has expanded to do more, but is still geared to helping children.

“We started off with a concern for children and we have never wavered,” Allen said.

“Women care about the welfare of children and families. We’ve got a driving force behind us and we have women who care about this. So, while we may come from every type of background in the community, one thing we have in common is we are trying to make the life of a child better as their needs change.”

The Child Welfare Club donates all the proceeds from the events to several local programs such as Sue’s Kids, Harvest for the Hungry, Backpack Buddies, and Ironton City Mission.

“And we do scholarships to Ohio University and Collins Career and Technical Center,” Blackwell said. “And we donate three times a year to the Ironton City Mission, at Easter, Christmas and Thanksgiving, so they have enough money to provide food for everyone.”

ROME TOWNSHIP — A new sports, training and therapy complex is currently being built on State Route 7 in Rome... read more