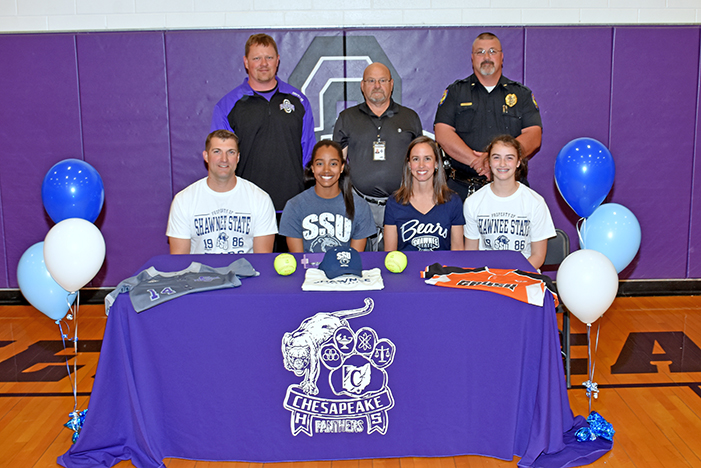 CHESAPEAKE — Playing softball has always been Brooke Webb’s passion. And now she gets to continue playing the game she loves.
The Chesapeake Lady Panthers senior softball standout signed a letter-of-intent with the Shawnee State Bears as she gets the opportunity to play at the next level.
“It’s always been my favorite. I started paying when I was 8-years-old. I’ve always wanted to play (college softball). I’m excited to get the opportunity to play,” said Webb.
The idea of playing college softball took root when she was about 12 or 13 and played in a tournament in Florida. The experience left a lasting imprint.
“My travel team went to Orlando, Florida, and played at the ESPN Sports Complex. I was 12, maybe 13. That’s when I realized that’s when I wanted to do this at the next level. People are watching you even now. That put it into perspective how important it was. I played with a lot of (Ohio Valley Conference) girls and it was really great.”
Along with Shawnee State, Webb also talked with several other schools including Kentucky State, West Virginia State and Fairmont.
As a pitcher, Webb is 5-1 this season and at the plate she is hitting .535 with three home runs.
Chesapeake Panthers’ coach Aaron Rice said Shawnee State is a good fit for Webb.
“She can play at the next level,” said Chesapeake coach Aaron Rice. “She can play anywhere in the field. They may want he to throw or be an everyday play player.”
At Shawnee State, Webb will rekindle a couple of former Ohio Valley Conference players Mackenzie Riley of Fairland and Haley Rawlins of South Point.
Also, Shawnee State had a lot to offer Webb.
“One, they had my major and it’s pretty good at Shawnee. And it’s close to home which I like. And I like coach and the players. I’m excited to get to play with (Riley and Rawlins). I think it’ll be fun,” said Webb.
Although she pitches for Chesapeake, Webb said where she plays at Shawnee State is still up in the air. But she doesn’t really care where she plays as long as she can get on the field.
“Coach (Steve) Whittaker isn’t sure where I’m going play. I’m just going to work hard this summer playing travel ball. As long as I’m playing, I’m fine with that,” said Webb. “I want to help the team however I can, on the field and off.”
One thing that has helped Webb is her work ethic.
“I’ve been going over to the Hit Center since I was 12. I’m still going over there with Todd McKinney. He encourages me to keep going on and he’s always had confidence in me.”
Webb — who will graduate as the class valedictorian — plans to major in exercise science and eventually become a physical therapist.

Bengals learning new offense after finishing last in the NFL

CINCINNATI (AP) — Andy Dalton is getting acclimated with the Cincinnati Bengals’ new offense, which is a lot different than... read more