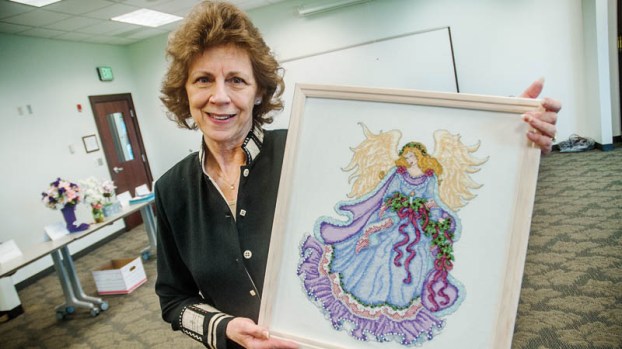 District meeting of three counties set for next week

PROCTORVILLE — For the past 75 years, members of the Lawrence County Homemakers have been meeting each spring for their annual Achievement Day celebration.

The group is comprised of three clubs: the Ohio Valley, Enslee and Southside Homemakers, all of whom sent members to the event.

Following the opening remarks, devotions and recitation of the Homemakers Creed, the group began the meeting by paying tribute to two members who have passed in the last year, Patricia Ellison and Pola Maniskas, of the Enslee club.

The guest speaker for the morning was Judy Ross, who co-owns Good News Llamas in Chesapeake, along with her husband, Tom. In addition to raising llamas and alpacas, which the couple take to various events, schools, nursing homes and other locations, they also run Back Porch Fibers, selling yarn and woven items made from the animals’ hair.

After the lunch, provided by Joy Coffman of Catering by Joy, the group handed out awards for the various arts and crafts categories members had entered into competition.

Taking Best in Show was Barbara Bayless, of the Enslee club, who won for her counted crossstitch piece of an angel.

One of the more unusual pieces was by Brenda Heffner, of the Enslee club, who had sewn an apron using men’s ties.

“You’ve probably never seen anything like this,” she said.

Anne Dobbins, the president of the Lawrence County Homemakers Council, said the group will meet again next Thursday at the same location for the district meeting of the Homemakers of Lawrence, Gallia and Scioto counties.

The district meeting rotates its location each year and 2018 is the Lawrence group’s turn.

Registration begins at 9:30 a.m. and the event will start at 10 a.m. The guest speaker will be Lisa Hastings of the Total Woman program at St. Mary’s Medical Center. The district meeting is open to public, but there is a registration fee. For more information call Dobbins at 740-377-4489.

Crews collect syringes, over 300 bags of trash Those driving on U.S. 52 between County Road 1A near Hanging Rock... read more