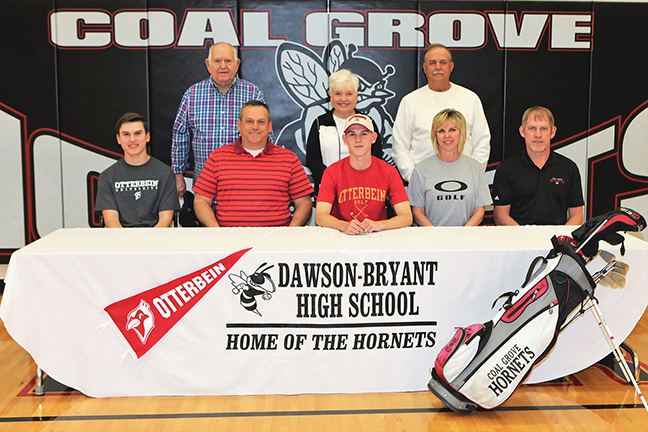 COAL GROVE — Coal Grove Hornets’ senior golfer Trevor Deere has a look that can study the break of the green like he’s studying for a final exam.
Chances are, he might be doing both at the same time.
The Hornets’ outstanding golfer wants to put his studies ahead of his golf game, and that is one of the reasons he selected Otterbein University over Cedarville and Malone for his college career.
“Otterbein was kind of the place I always wanted to do. I wanted it for the engineering school. I was going to Otterbein whether the golf was there or not. I was kind of happy when that came through,” said Deere on Friday.
During his career, Deere has been a three-time team Most Valuable Player, three-time captain, four-time All-Ohio Valley Conference, three-time all-district and a state qualifier his sophomore season.
“It was a lot of fun playing in the state tournament. It’s a different level of competition. Really, I play a lot of events outside of high school golf so it’s pretty similar. (The state tournament) really wasn’t too different,” said Deere.
“I’ve had him since he’s been a freshman and I’m fortunate to have had a couple who does everything right, don’t complain, you count on them every day. I know he’ going to continue doing it and look forward to him do it,” said Hornets’ coach Dan Morgan.
“He’s been consistent every day for four years. He’s going to be missed.”
Playing different levels of golf started at an early age for Deere and it helped develop that consistency.
“I started playing when I was about seven, but I didn’t really start taking it serious until I about the seventh grade,” said Deere
“I started playing with my dad and my grandpa when I was younger. I was always around it. But I kind of like I’m on my own. It’s good playing with a team but it’s also fun being on your own. You have to go out and practice and commit to it. And going out on the golf course you are away from (cell) phones, you’re kind of on your own.”
While Deere’s love of the game grew in a short time, it also initiated thoughts of playing at the next level.
“In the eighth grade is kind of when I started thinking about playing college golf and it kind of continued on from there,” said Deere.
Since he knows college golf will be a bigger challenge, he doesn’t plan to set any unobtainable goals as part of the Cardinals’ team.
“My main goal going in is just qualify for the traveling team to be able to compete for the tournaments and make the top five players,” said Deere.
If there is any possible thought of playing on a professional tour in the future, Deere said he hasn’t given that much thought.
“I guess anything is possible. I’d love to do it, but right now I’m mainly focused on school first and golf second,” said Deere.