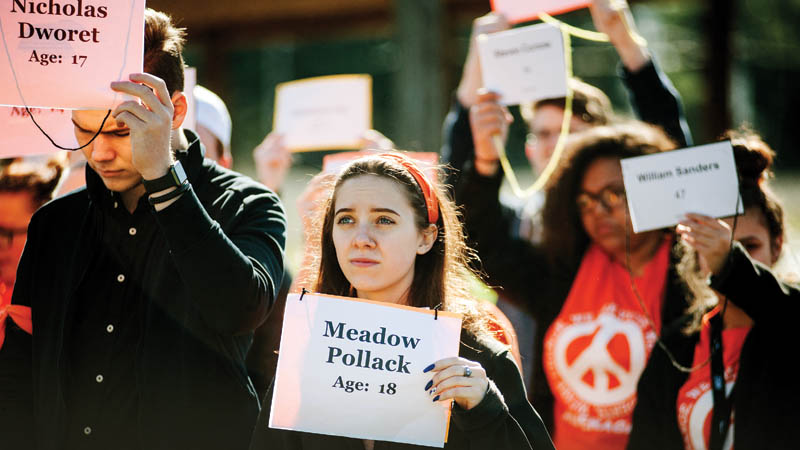 SOUTH POINT — Seeking action on the issues of gun violence and school safety, students from South Point High School gathered at the village’s park on Friday.

Organizers of the event had originally intended for students to walk out of classes that morning, but school officials announced the night before that all of the district’s schools would be closed to faculty and students on Friday.

Superintendent Mark Christian said the decision was made after some parents voiced concerns about the atmosphere surrounding the plans.

The walkout was to be part of the National School Walkout, a day of action by activists on Friday, which marked the 19th anniversary of the 1999 school shooting at Columbine High School in Colorado, which left 15 dead, including the two perpetrators.

Christian said school officials had heard that counter protests on the issue were planned by others and concerns of threats were circulating.

The closure of the schools did not deter organizers, who worked overnight to move the  event to the park, where a crowd of 60 turned out.

There are children counting on us who literally do not know they are counting on us,”  Austin Johnson, 17, a junior at the school and the chief organizer of the event, said. “Today we say, ‘no more.’”

Johnson, who is involved in the Young Democrats club at the school, said school safety should be a concern for all.

“Democrat or Republican, this should not be a political issue,” he said. “Children are dying.”

He stressed that the participants were not against gun ownership and the Second Amendment, but instead sought measures like a ban on bump stocks and assault weapons, as well as an increase in security at school facilities.

He said that little change had come since Columbine and that school massacres had become something “that society is used to.” He said lawmakers and officials should take action immediately.

Most participants at the rally wore orange shirts with a peace sign and the message “We are victims. We are students. We are change. #NeverAgain.”

Brittany Dotson said students should not have to feel concerns for safety in their classrooms.

“We should not be afraid someone sitting beside us could pull out a weapon,” she said.

“We should not have thoughts that students are in danger in enclosed areas.”

Dotson called for more intervention, when warning signs become apparent. She said action should have been taken when Nicholas Cruz, the suspect in the Feb. 14 shooting at Stoneman Douglas High School in Parkland, Florida, which killed 17, had posted on social media prior to the massacre that he was “going to be a professional school shooter.”

She also said locals should not take safety for granted.

“If you think it can’t happen here, at South Point High, just because there’s a state trooper who parks at the bottom of the hill, you’re being foolish,” she said.

Johnson praised the work of teen activists across the country, who have followed the lead of Parkland survivors in speaking out.

“Spread the word. Have you heard? All across the nation. We are going to be a great generation,” he said.

The rally was joined by two students from Parkland, Nicole Anderson and Carmen Lo, who called Johnson and addressed the crowd over a loudspeaker.

Anderson recounted her experience that morning. She said that the school had a fire drill earlier in the day and when the alarm began and calls were made to evacuate, many were unsure if it was a real emergency.

She said after exiting the school, she saw police cars everywhere and heard helicopters circling overhead.

She said she and her friend then made the decision to run to her house, which was only minutes away.

“I was fortunate enough to be out before the school went on lockdown,” Anderson said, adding that many had to stay at the school until an all clear was given.

She said, upon arriving home, they turned on the television and found out what was going on. She said she then spent the rest of the day calling and texting friends nonstop, trying to find out if they were safe.

Lo, 17, a senior, noted the attack occurred on Valentine’s Day, which was “supposed to be a day of love.”

She said it had been difficult for students to resume their education following the tragedy.

“It’s been very difficult to go back,” she said. “It’s been an emotional roller coaster.”
She said, at first, there was no work done in classrooms and the focus was solely on recovery.

“We just talked about it,” she said. “And they brought in therapy dogs, which was great.

She said many of her classmates have been dealing with post-traumatic stress and things such as the sound of helicopters have triggered feelings of panic.

Anderson thanked the South Point students for their efforts.

“We are so proud of all of you for standing up and speaking out,” she said. “Your voices do matter.”

Johnson thanked the Parkland students and pledged to continue their efforts.

“We stand with you and are fighting the same fight,” he said. “We may not be going through the same emotions as you, but we have your back and support you.”

On the issue of the school cancellation, Johnson said he had been at odds with officials at the school as he was planning the walkout over the last few months.

He questioned the reports of counter protests and threats and said he thought the school district was “using our safety as pawns.”

“Do you see any counter protesters here?” he said. “I believe South Point High School is missing out on an important opportunity to show the duties of citizenship and leadership.”

He said there had been some support from faculty, noting the attendance of three teachers at the rally, as well as school board member Natalie Adams.

Christian said safety was the sole motivation for canceling school on Friday.

He said the school had been notified of threats made on social media and many parents in the district had said they would not be sending their children to classes that day.

Christian said the planned walkout was the first of its kind that he had to deal with as superintendent. He said, had the walkout occurred, the gates to the high school would have been shut.

He said some involved in the walkout had invited people to come for the rally and that visitors are not allowed on school property without check in and being approved by the office.

Christian said the school had consulted with the Lawrence County Sheriff’s Office and had requested a law enforcement presence.

He said school officials were still not satisfied that the situation was safe and the decision was made to call off classes, adding this was not made lightly, as the schools were in the middle of annual statewide testing.

As for whether the school had discouraged the protest, Christian said schools are not allowed to endorse a cause or make concessions for any issue.

He said he consulted with the school system’s lawyers and that a letter was sent home to parents, informing that the penalty for skipping classes, one day of after school detention, would remain the same for those who took part in a walkout.