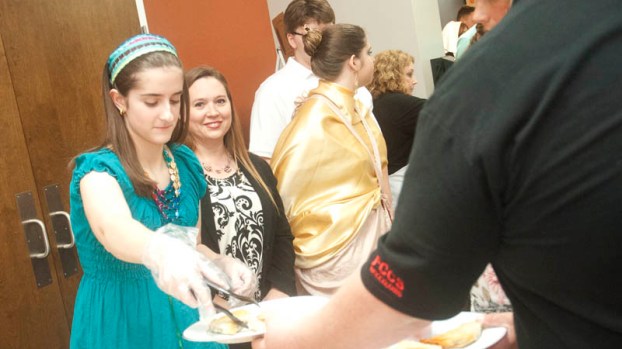 A world of flavor

SOUTH POINT — Guests supporting the Tri-State STEM+M Early College High School were treated to dishes from around the world on Thursday night.

A fundraising gala took place at Tri-State Worship Center on Solida Road and, dressed up in their finest dresses and suits, students of the school ushered the roughly 200 attendees to their tables and served them a dinner with selections from several local restaurants.

She said each of the restaurants, which included Casa Grande, of South Point, Nawab Indian Cuisine, Surin of Thailand, Shangri-La Chinese, Navarino Bay and Taste of Asia, of Huntington, Fratelli’s Italian, of Barboursville, and Coal Grove Freez-Ett, had provided an appetizer, main dish and a dessert.

Spears said some of the students, who were wearing traditional costumes, would tell attendees about each dish and tell them about customs of the country.

In the case of the Freez-Ett, which represented American food, servers dressed as a 1950s greaser and a waitress on roller skates.

Director Jayshree Shah said the public school, which is in its inaugural year of offering science, technology, engineering, math and medical education, hopes to host the event each year.

Spears said the funds would go toward a permanent computer lab and purchasing software for the engineering program.

“It will give us the high end technology we need,” she said.

She said they also plan to build a new classroom in the empty warehouse space of the building, which is located on Solida Road. The school will remain there for the next few years, before moving to a permanent home in the wellness center at The Point, once it is constructed.

She gave a special thanks to the Rev. Terry Wagner, of the church, for allowing use of the building for the dinner. She also thanked emcee Doug Korstanje of the governing board, as well as organizers Shirley Dyer, Carol Boll, Dorothy Bledsoe,Jame Watters, Shawna Stevens, Tammy Bailey, Gary and Angela Forman and Erica and Bethany Himes.

Speakers for the dinner included Robin O’Keefe, an associate professor in biology at Marshall University, who told the crowd about his trips around the world, working as a paleontologist and studying marine fossils of reptiles such as the plesiosaur, and Sutoidem Akpanudo, an associate professor of internal medicine and translational science at the Joan C. Edwards School of Medicine at Marshall University.