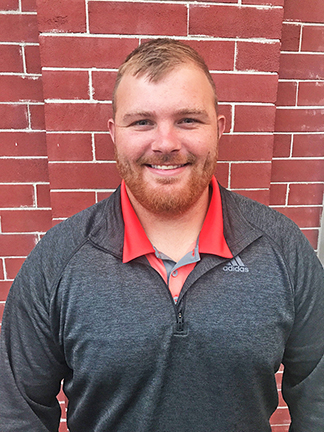 The long process has ended.
The Ironton Fighting Tigers’ search for a football coach finally climaxed on Monday when Trevon Pendleton was named the head football coach during a special meeting held by the Ironton Board of Education.
The board voted 5-0 based on the recommendation of athletic director Mark LaFon.
“I just want to thank my wife, my family and everyone back at Portsmouth West for being very supportive of me during this process,” said Pendleton. “It feels like a dream come true. This is what I’ve always wanted to do. I’m just ready to hit the ground running.”
The former Michigan State Spartans’ fullback has been an assistant the past two seasons at Portsmouth West.
Pendleton, 25, played in the T-formation at West but said he wants to run multiple offenses that will run and throw the ball.
“We’re going to be diverse,” said Pendleton.
Pendleton said he wants to introduce a different style of defense but plans to use a 3-4 base.
“What we are going to do depends on the personnel. We have the athletes to do it at Ironton. We can jump in and out of sets, but it’ll be based on personnel,” said Pendleton.
The new coach plans to meet with players on Wednesday and then assemble his coaching staff.
“Obviously, our goal is to get in there and meet the kids. Next, our goal is to get the staff in there to meet them,” said Pendleton.
“But our main goal is to win football games. I’m not saying we’re going to win all our games, but we want to put our kids in position to win. I can’t wait to get started,” said Pendleton.
A 2011 graduate from Portsmouth West, Pendleton was the Division IV Southeast District Offensive Player of the Year as a senior and first team All-Ohio in 2010.
He suffered a broken leg at the end of his senior season that caused colleges to back off, but he walked on at Michigan State and earned a scholarship.
He was a four-year letter-winner for the Spartans where he played in 49 games including 28 as the starting fullback. He received the “Unsung Hero Award” his senior season.
Pendleton played in four bowl games including the Buffalo Wild Wings, Rose Bowl, Cotton Bowl and in the 2015 college football semifinal playoff game played in the Cotton Bowl against Baylor.
In the 2015 Rose Bowl, he had two catches for 21 yards including a 2-yard touchdown pass in the second quarter against Stanford.
He had a career-long 74-yard reception to the 1-yard line that set up the winning score as MSU rallied to beat Michigan 23-21 in 2015.
Pendleton replaces Mark Vass who coached Ironton the past six seasons.
Vass had a 35-29 record including 2-4 in the postseason. He won two Ohio Valley Conference championships in three seasons and his teams made four playoff appearances.