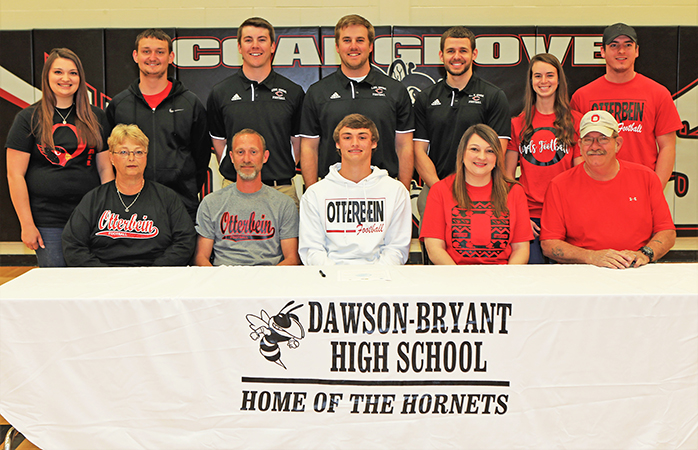 COAL GROVE — There’s no “I” in team or in Jordan Case.
The Coal Grove Hornets’ senior football standout has been the consummate team player, and that goes for other sports such as basketball and baseball.
That unselfish style of play has been a key to his success and a big reason he will continue his football career at Otterbein University.
“I’m just trying to do everything for the team that I can. I don’t care if my name’s in the paper, even if it’s put out there. As long as everyone knows I’m unselfish, that’s good for me,” said Case.
Although he is projected as a defensive back for the Cardinals, Case said he that could change once he’s on the campus.
“I might be a wide receiver, but anything they ask me to do I’m going to do it there, too,” said the 6-foot-1, 165-pound Case.
Moving up to the next level will mean some changes for Case as he adjusts to college football.
“I’m going to have to gain lot more weight just to compete with the guys up there. Their program, they’re good. It’ll be muscle weight,” said Case.
“They said it doesn’t matter if it’s a freshman or senior, if you’re good enough to play for them, then you’ll play.”
Coal Grove head coach Evan Ferguson said Case’s best football is ahead of him.
“He did great for us last year (in the secondary) and I’m sure he’ll do well for them as well,” said Ferguson.
“His frame allows him to excel at the next level. He has the size to be a good corner in college and I think he’s going to continue to improve his speed and his strength. He’s got a good frame and he’s going to continue to build on that. He has a high ceiling for college.”
Case wants to major in Allied Health and go into hospital administration which was the main reason he selected Otterbein.
“I talked to Capital and (Kentucky Christian) and that was pretty much the main ones I was interested in. It was my major (that was the reason for the choice). The other schools didn’t have what I wanted to do, so that’s why I picked Otterbein,” said Case.
The Cardinals were 6-4 last season. Case said there is no guarantee about playing time, but he plans to work hard and see what happens.
“I went there a couple of times and watched them play. I really like their coaches,” said Case.
At Coal Grove, Case helped the Hornets win the Ohio Valley Conference and reach the Division VI regional championship game. He also started on the basketball team that advanced to the district finals.
Case said just being a part of the experience of the postseason and being around his teammates were his biggest thrills.
“Everybody being there in the community. That helped us out a lot. It just made me want to do more sports-wise,” said Case.
“My team was important. I had the same group of guys my whole career. We’ve all been together and we’re all really close. We all do it for each other and it helps a lot. Everybody pushes each other.”