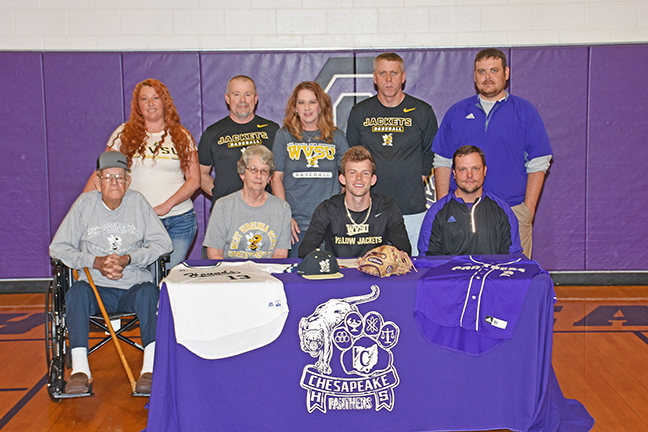 CHESAPEAKE — Baseball has always been a game handed down from father to son. It’s in Evan Burcham’s hands now.
It was grandfather Leo Scarberry passing the national pastime down to his son Tommy Burcham and then the torch was passed to Evan Burcham.
And the youngest Burcham is taking his lineage on to the next level as the Chesapeake Panthers’ senior baseball standout signed a letter-of-intent on Wednesday to play for the West Virginia State Yellow Jackets.
“I just love it,” said Burcham who has played the game since the age of four.
“My dad played it. My grandpa played it. They almost went pro. I guess I was just next in line to play it.”
Burcham talked with several school before picking West Virginia State over Marshall and Urbana. It was WVSU’s tradition that caught his attention.
“It was just walking into the room and all the trophies,” said Burcham. “And they hold you accountable for everything. They have a good academic program. I have to take a midterm every three weeks. They make you stay on top of everything.”
Chesapeake head coach Justin Davis expects Burcham to do well at the college level. He said Burcham has the necessary tools to succeed.
“He doesn’t have super skills in anything, but he does have all five tools. It’s just a matter of how much are they going to develop, how much is he going to get better at those things,” said Davis.
“He works extremely hard, loves baseball, you never have to beg him to come. He goes by himself to hit baseball with his dad, hits on his own off the tee all the time. He’s always working, always trying to get better.”
Burcham has played shortstop this season but is projected as an outfielder for the Yellow Jackets and he is more than happy with the position change.
“I’ll probably play outfield all the time, but I might get moved around because I’m athletic enough to play anywhere,” said Burcham. “They just want me to come in and be ready for anything.”
Davis said he considered playing Burcham in the outfield but he was needed more at shortstop and his versatility allowed the right-hander to perform well in the infield.
“He wanted to play outfield for us this year. We need him to play outfield for us, but we also need him to play short and third base and second base and other various spots. It’s just the choice we had to make,” said Davis.
“He has the speed, he has the arm. It’ll just be an adjustment learning to judge balls hit hard right at him.”
Besides baseball, Burcham played football and he said the two sports complement each other well.
“Football has helped because of the mental toughness. Baseball is all mental. You’ve got to have confidence out there,” said Burcham.
Although Burcham has been valuable as a player, Davis said he has the leadership qualities that have helped the team.
“Obviously, he’s a very good player. He plays shortstop, he hits the ball well or us, he hit a home run for us at Portsmouth. But he’s also been a good senior leader for us. He shows others what it takes to be a good baseball player. It takes that every day type of effort,” said Davis.
Burcham plans to major in accounting. 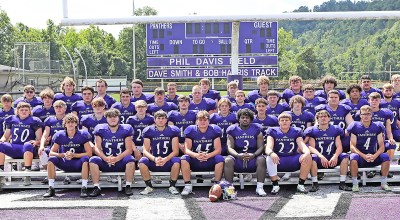