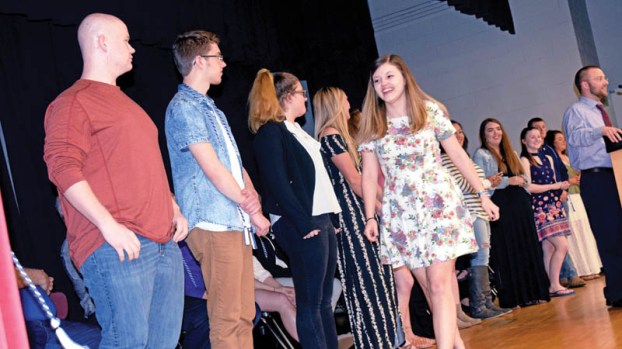 Skylar Chinn, of South Point High School, is called to receive her graduation cords during the Project Lead the Way Senior Celebration Dinner at Dawson-Bryant High School on Tuesday.

Dodgion said while those students have studied in the biomedical and engineering programs of the STEM program, they have learned much more.

“The curriculum you’ve been exposed to these last four years is going to benefit you tremendously in life,” he said, stating that the program has taught them critical thinking, team building and research skills.

“These will benefit you in college and life in general,” he said.

Dodgion said when CCTC launched the PLTW program, one of the first in Ohio schools, they wanted to try something different. Instead of basing courses at the vocational school’s main campus in Getaway, he opted to bring the classes to the individual school districts in Ironton, Dawson-Bryant, South Point, Chesapeake, Rock Hill and Symmes Valley.

“We’re the only school in Ohio who does it this way,” he said.

This year, the program will see 62 students graduate, many of whom already have careers and fields of study picked out for college.

Dodgion spoke of who has made the program work.

“It’s not me,” he said. “I just run the technical school. But we have the most wonderful group of faculty I’ve ever been associated with.”

Matt Monteville, satellite director for PLTW, said the skills of the program are hard to teach and thanked the faculty for their “considerable dedication” in doing so.

He congratulated the seniors.

“You’ve completed a journey that you started with us four or five years ago,” he said.

Many of the graduates work was highlighted, such as Alison Franz and Savannah Stidham of Ironton High School, who designed a new ticket booth for Symmes Valley High School.

Engineering instructor Ival Shields said the booth was so well received when constructed by students, that there has been a request for another.
Monteville said the students have persevered and succeeded through hard work.

Monteville said the graduates of the program will take part in ceremonies at their individual high schools, and are also welcome to take part in CCTC’s ceremonies.

Dogs, cats up for adoption at county shelter The Lawrence County Dog Shelter has several dogs and a few cats... read more