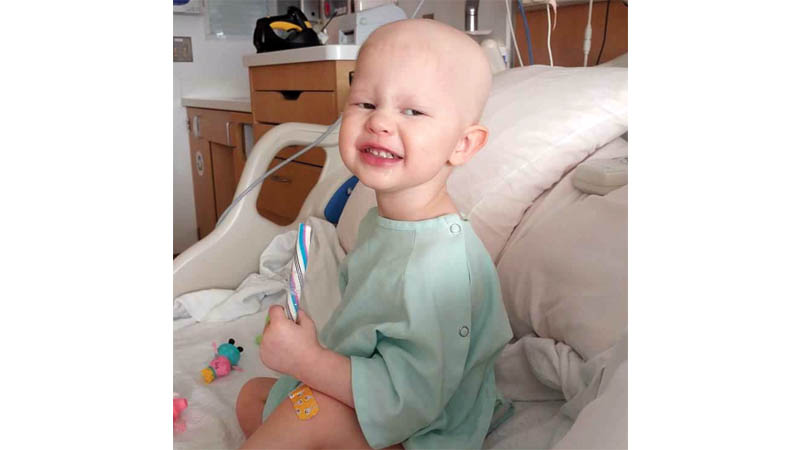 There will be poker run on Saturday for 2-year-old Hannah Staton who is battling cancer.

The event is called the Hope for Hannah Benefit Ride, with proceeds going to the Staton family to help with medical and travel expenses.

Hannah Staton was just 19 months old when she was diagnosed with Stage 4 Rhabdoid cancer last September.

Hannah’s mother, Carissa Staton, said she and her husband, Josh, have been taking their daughter to Nationwide Children’s Hospital in Columbus for the girl’s radiation and chemotherapy.

On Wednesday, Carrisa and Hannah were at Cabell-Huntington Hospital after the girl got a netropenic fever which includes an abnormally low amount of white blood cells which help the body fight against diseases.

“We just got released from Nationwide (on Tuesday) and we weren’t even home three hours before she got a fever,” Carrisa said. “She has spent more time in the hospital than not, since she has been diagnosed.”

She said that Rhabdoid cancer is very rare and there is very little data on it.

“And typically, the prognosis for it is very poor,” Carrisa said, adding that it generally affects children under 5 years of age. “Hannah right now has clear scans and we are almost done with her chemotherapy. We have two more rounds to go.”

“There have been cases of patients being declared in remission and then it just comes back out of nowhere,” she said. “But Hannah has had complete reception of her treatment which makes the odds in her favor.”

Carrisa said that she feels God has Hannah covered.

“Regardless of which way things may turn, I think God is going to use her and her testimony to glorify Him,” she said.

Hope for Hannah Benefit Ride will start at Frog Town in Ironton with registration starting at 10 a.m. Cost is $15 for a single and $20 for doubles. The poker run ends at Frog Town with a hog roast, live entertainment, a raffle, a 50/50 split the pot and a chance to see who got the best hand and the worst hand.