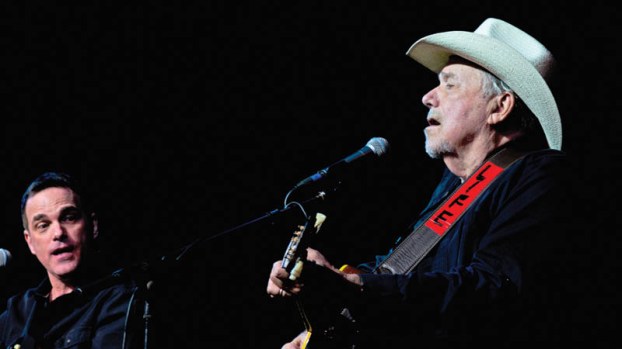 Rick Ferrell and Bobby Bare perform at Shawnee State University in Portsmouth on Friday, as part of a concert to benefit the floodwall mural project in Portsmouth.

PORTSMOUTH — “It’s always good to be home,” Bobby Bare told the audience at the Vern Riffe Center for the Arts at Shawnee State University on Friday. “They treat you good.”

Bare made a return to southern Ohio to perform at the show, which served as a benefit for the Portsmouth flood mural projects and was joined onstage by Jacob  Tolliver and Rick Ferrell, both of Portsmouth and Ricky Skaggs, of eastern Kentucky.

Bare warned the audience that he was feeling a little under the weather with a cold when he took the stage, but said he really wanted to make it to the show.

“I didn’t know I was going to wake up this morning without a voice,” he said. “I’m not even sure I can sing tonight.”

However, once the familiar opening riff to his hit “Detroit City” began, any weakness in his voice was negated by backing from Ferrell and Tolliver and the crowd singing along.

“What do you want to hear?” Bare said, opening it up to the audience, and letting them pick the setlist featuring such hits such as “Marie Laveau,” “The Winner” and  “500 Miles.”

Bare, a native of Pedro, has had two reasons to celebrate this month.

His 83rd birthday was on April 7, and, while playing the Grand Ole Opry that night, he was surprised when Garth Brooks walked onto the stage.

Brooks announced that Bare had been reinducted back into the Opry, after his membership lapsed decades ago.

“It was a total shocker,” Bare said of the honor. “I’m probably the oldest inductee ever.”

Friday’s show served as a showcase for the musical talent in the region.

Tolliver, who portrayed Jerry Lee Lewis for four years in “The Million Dollar Quartet” in Vegas, also paid tribute to one of the regions biggest names, playing the Elton John song “Roy Rogers.”

“He messed it up, though,” Tolliver said of John’s rendition of Bernie Taupin’s lyrics about the Ohio great, stating that it did not sound like “a cowboy song.”

Closing out Friday’s show was Skaggs, who, along with his band, Kentucky Thunder, delivered a rousing performance of bluegrass standards and his own material.

He is set to join Bare in the County Music Hall of Fame later this year.

The concert was sponsored by the Glockner Family dealerships and WXNT radio to help pay complete the 2,000-foot long mural project in Portsmouth.