Conley to continue at Rio Grande 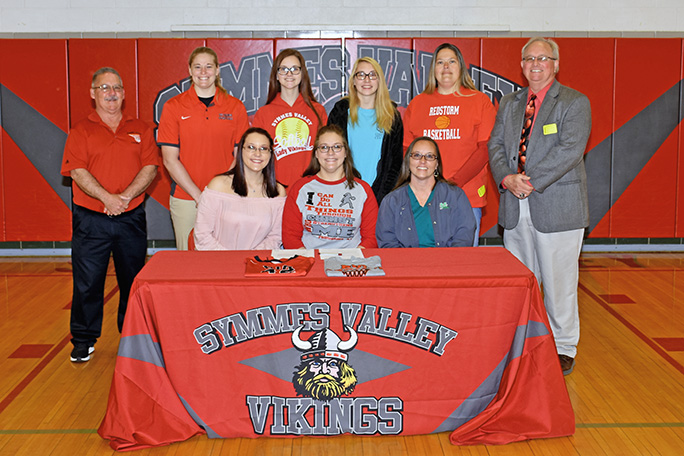 WILLOW WOOD — When Commissioner Gordon needed help, he picked up the red phone and called Batman.
The Rio Grande RedStorm women’s head coach Dave Smalley needed some help and he had assistant coach Brooke Marcum dial the number of Symmes Valley Lady Vikings’ senior Paige Conley.
“I was sitting at home and the phone rang. It was coach Marcum and she asked ‘how would you like to play basketball for Rio Grande?’” said Conley.
“I was upset I couldn’t play anymore and Rio called and I said, ‘Yeah.’ I get to key playing basketball.”
After hours of conversation, Conley decided to take the RedStorm on their offer and signed a letter-of-intent on Monday to play basketball for Rio Grande.
Rio Grande head coach Dave Smalley said Conley’s 6-foot frame was a key factor in the decision to sign the Lady Vikings’ senior.
“She has good size and fits into our jayvee feeder system. You can’t coach size.,” said Smalley. “She’s a local player and a good person. I don’t think we can go wrong.”
Conley said she began playing basketball at a young age when her aunt Brenda McMillian took her outside and said, “Let’s try this.”
Conley liked the game and began playing team ball in the eighth grade.
She missed her freshman year but returned as a sophomore.
“I wanted play again,” said Conley. “I get to work in the post. When I got my playbook they sent a DVD to watch my position. They said know all positions, but focus on the four and five spots.”
Lady Vikings’ head coach Alvin Carpenter said Rio Grande is getting a good student and a fine person for their program.
“She was really good for us because she’s got size and she went up against Jensyn (Shepherd) and that made it good for us. You can’t find a better person. She worked hard and she was a great team player,” said Carpenter.
“You can’t find a harder worker and a better teammate.”
Conley — whose mother Pam Doss is an LPN at Cabell Huntington Hospital — plans to major in nursing.
“They told me academics come before basketball. They said you’re a student-athlete and student comes before athlete,” said Conley.

Hornets, Jones get past Panthers, 13-8