OPIOID CRISIS: The human side 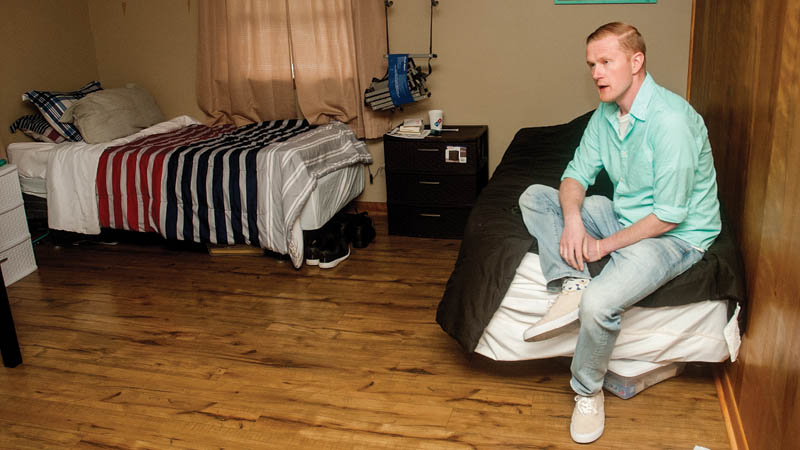 Jeremy Brown, site manager for Riverside Recovery Services’ men’s sober living house in Chesapeake, shows one of the resident rooms during a tour of the facility.

While law enforcement has been trying to curb the flow of illegal drugs causing Ohio’s opioid crisis, the effort against the epidemic has been a multi-front battle, with first responders and treatment groups focused on addressing the addiction behind the crisis.

Paramedic Justin Spurlock, who works at Lawrence County EMS Station 1 in Ironton, said, while crews still respond to a heavy amount of overdose calls, the number is down somewhat this year.

“We had more last year than this year,” he said. “We used to have one every shift, now it’s every multiple shifts.”

He said, in his time on the job, he has seen drug use go primarily from abuse of prescription pills such as Oxycontin to the rise of heroin.

“The city went through the pain medication crisis,” he said. “And when that became hard to get, they all went to heroin.”

Spurlock said when they receive a call indicating that someone is “unconscious, possible overdose,” many times, it will be a home they have responded to in the past.

“We’ll go into the house, and they’ll either be lying down or sitting,” he said. “We see if they’re breathing, then we check their pupils.”

He said pinpoint pupils are indicative of an opioid overdose.

If the patient is breathing, Spurlock says an IV of the anti-opioid drug Narcan is administered. If they are not breathing, a bag valve mask is used to breathe for the patient while the IV is given.

He said heroin is “cheaper than it used to be, and stronger now,” and that it now requires a larger dose of the anti-opioid drug Narcan to revive those who have overdosed.

He said when he started on the job about a decade ago, it took .8 milligrams to revive a patient, while now it can require up to 2-4 milligrams.

He said once the Narcan is administered, the patient wakes up immediately.

“They start breathing and it’s like nothing happened,” he said. “Except they are dopesick.”

Spurlock said they have been able to revive most patients.

“Our success rate is pretty high,” he said. “We’re usually able to save four out of five.”

He said time in responding is key to success.

“The first thing we ask is how long they have been down,” he said. “That’s going to affect everything.”

Spurlock says, while overdose calls are high, most calls EMS deals with are still for medical reasons. Of overdose calls, he says heroin is still in use, but crews have seen a resurgence in methamphetamine use in recent months.

Spurlock said people need to realize they can’t “arrest their way out of the problem” and that treatment for those addicted is a must.

One group dealing with the addiction crisis is the Alcohol, Drug Addiction and Mental Health Services Board of Scioto, Lawrence and Adams Counties.

A political subdivision of the state, there are 55 boards in Ohio.

ADAMHS program coordinator Michele Bower said the group is committed to educating the public on the issue and, through four agencies in the county, helps to cover clients who do not have Medicaid or Medicare coverage.

She said the agencies have a team that tries to get addicts to treatment.

“For every overdose, they go to the hospital and offer services,” she said.

As addiction has gripped the region, many treatment services have been established in the county.

One is Riverside Recovery Services, a for-profit company based in South Point.

Shannon Ellis-Fetherolf, program director for Riverside, said they specialize in outpatient treatment for those who are addicted.

She said many clients come on their own, while others are referred from Child Protective Services or judges in the county.

Riverside was founded in 2015 by Amy Smart, who is herself a recovering addict. Smart served time in prison as a result of her addiction and established the company following her release and recovery.

Ellis-Fetherolf’s clients enter their system after going through a detox program. Upon arriving, they are given an assessment and a treatment plan is plotted.

“They’re assigned a counselor and given a group therapy schedule,” she said. “We have 18 groups that meet throughout the week.”

Riverside runs four sober living houses in the county, such as the one for male clients in Chesapeake.

Clients first go through a two-week orientation upon arriving in the home, which is staffed at all times, he said. After that, they are permitted to leave with staff.

“If they’re working, we help them to open a bank account,” he said.

Brown’s efforts are made to place residents into jobs, so that they can return to a productive life following treatment.

Ellis-Fetherolf said the program has had a high success rate.

“Those who have been in our houses do really well,” she said.

Brown points to success stories that can offer hope, citing examples of graduates of the program who are now successfully working.

“One is with a roofing company now,” he said. “And another is doing welding.”

While Ellis-Fetherolf said they have some repeat clients, she is pleased that authorities in the county have put the focus on alternatives to incarceration.

“They’ve been good working with people,” she said. “They try to send them back to treatment instead of to jail.”

For many working the first response and treatment side of the addiction crisis, what they have seen has affected them personally.

Spurlock said he grew up in the region and has seen many people he went to school die from overdoses.

“It’s really unfortunate how it takes hold of people,” he said, stating that many of the patients are his own age and in their 30s. “People don’t understand it until they see it. I’ve seen mothers give up kids.”

He said, for many, the environment is a factor.

“People grow up and there’s nothing to do,” he said. “They’ve seen mom or dad do it and it’s commonplace. It doesn’t seem abnormal to them.”

He said, while many in the public express frustration about resources being used on repeat overdose calls, paramedics will always do all they can to save a life.

“That’s somebody’s brother or sister, somebody’s mom or dad,” he said. “If it was yours, you wouldn’t feel that way. Even if it takes two or three times, our hope is that we can get them to where they treat the addiction.”