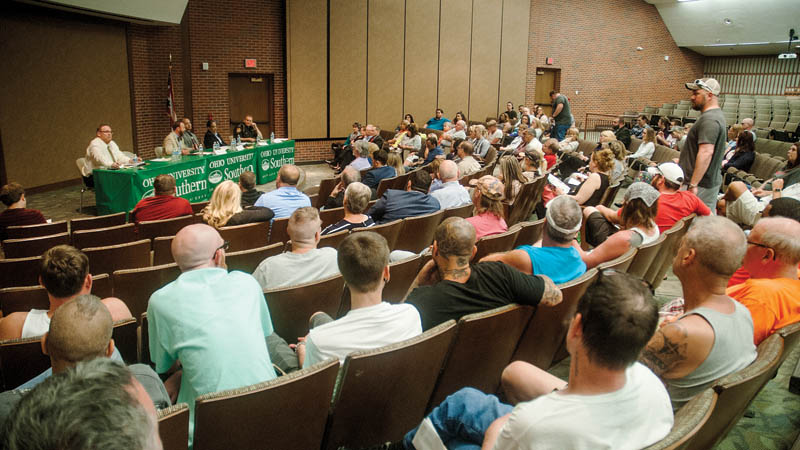 Members from the community gather in Bowman Auditorium at Ohio University Southern for the Opioid Crisis in Ohio forum Wednesday evening.

A panel of experts discussed the opioid addiction epidemic in Ohio on Wednesday night, as part of the first in a series of forums The Tribune is hosting on the issue.

Davies, who works with infants who are exposed prenatally to addictive substances, opened the panel by discussing the science behind addiction.

He said the pathway to substance abuse addiction is “the same, no matter what you’re addicted to — whether it’s caffeine, sex or shopping.”

Davies said opioids bind to the dopamine receptor on an individual’s brain.

When a person takes their first dose of heroin, he said dopamine levels jump to 10 times to what a person normally experiences for positive feelings.

“Their happiest memory is bleached out,” he said.

As exposure to the drug continues, he said positive feelings associated with good memories fade away.

“At that point, it’s no longer about getting high, it’s about not hurting,” he said, stating that the person now operates at dopamine levels that feel like “the worst flu ever.”

“People ask ‘Why don’t they just quit?’” he said. “Well, they can’t. Their brain is operating at a level of sheer pain.”

He said it then takes medical assistance to get a person back to a normal range, where they will be receptive to taking in therapy. And it takes 90 days of intense counseling to make them responsive so they can work on rebuilding relationships.

He said it is imperative that society not throw up walls to addicts and that communities recognize it as a social disease.

“It’s not just bad activities,” he said. “It’s not a spiritual problem. We need to build social systems to help them.”

Boxill said people have been quick to judge those who become addicted as having a “character deficit.” She said it is a disease and should be looked at no differently than other medical conditions.

She said people need to look at social determinants in the region, which lead to addiction, such as lack of employment, as well as factors in an individual, such as past physical or sexual abuse.

Ballard, who recently launched the county’s first drug court, was praised by many in attendance, including some who had come before him as a judge, for his work on the issue.

He said it affects people in all walks of life, sharing that he had recently spoken with someone who had spent their day treating a 68-year-old man and a 22-year-old woman.

Ballard said no one aspires to become addicted and agreed with Boxill that people should stop viewing addiction as “a choice.”

He said his goal is for the court to “become different” in how it has operated in the past on the issue.

“It used to be that you would bring a case and decide the sentence after prosecuting an offender,” he said. “Nowhere did anybody identify the root cause of the problem. No level of incarceration is going to help an individual until a root cause is addressed.”

Lawless also spoke of the social factors involved in the crisis.

“We live in an area where there are few jobs,” he said. “People get out of jail and they’re right back in the same area, with the same friends and family.”

He said he encounters, not only recidivism, but multiple generations of a family being affected.

Many on the panel stressed the need to educate the next generation about the dangers of addiction.

Boxill cited the Health and Opioid-Abuse Prevention Education (HOPE) Curriculum, which she said the state is requiring of schools in the state.

“It’s free, and there is no unfunded mandate,” she said.

Davies said it is important that children have the “executive functioning ability to make positive decisions.”

Ballard cited the work of the Lawrence County Recovery Coalition, which he founded, along with Davies, in reaching out to area schools.

Boxill said, while addiction has never reached more than 11 percent of the population, such programs are still strongly needed.

“What would that percent be, if we didn’t have preventive education?” she said.

All on the panel discussed the need for more resources in taking on the crisis.

Davies pointed to the fact that 20 percent of infants born at Cabell-Huntington are prenatally exposed.

“As the epidemic has grown, it has hit rural areas much harder than urban areas,” he said. “Our response as residents should be to collectively tell Columbus ‘This is what we need here.’”

Boxill encouraged all local officials to keep accurate and thorough statistics, which they can use when approaching lawmakers for funding.

“Data is critical for telling your story,” she said.

All on the panel said the main focus should be community coalitions in addressing the crisis.

“We need to start working on the base of this,” Davies said. “If we start pulling together as a community, it will get better.

Ballard thanked Boxill for her work, stating that she was present at the first meeting of the Recovery Coalition.

He said that he and Lawless, as well Lawrence County Prosecutor Brigham Anderson and many local officials have been working together, coordinating their efforts.

“One of the good things that has come out of this tragedy is that we have all be learning to cooperate,” he said.