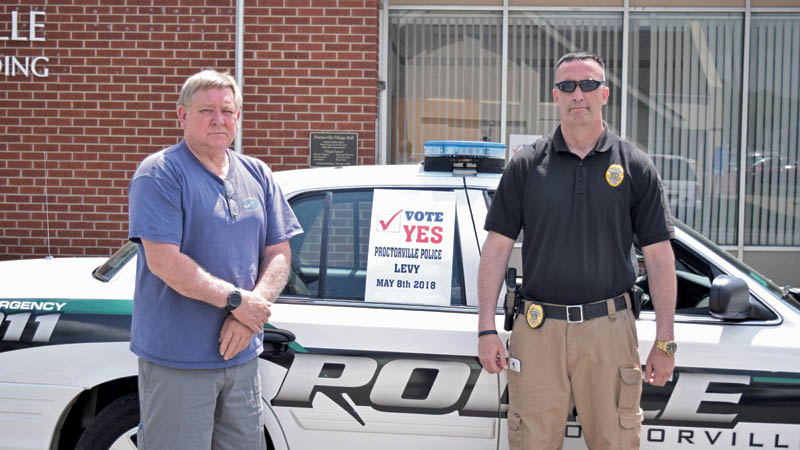 Proctorville Mayor Rick Dunfee and police Lt. Michael Jaden are urging voters to support the police funding levy that will appear on ballots in the village in next week’s primary election.

3-mill levy will be on primary ballot

PROCTORVILLE — Voters in the village of Proctorville will be deciding on a 3.3-mill funding levy for the police department in Tuesday’s primary election.

Mayor Rick Dunfee is urging the passage of the levy, which the council voted to place on the ballot earlier this year.

“The main need is to provide support of the police department and its operation,” he said.

Dunfee said the police department has relied on the village’s general fund and traffic tickets for funding.

“They spend more time on the road writing tickets,” he said. “This would free them up to drive around and do backstreet protection,” he said.

Dunfee said the village’s budget has been tight as a result of a lost tax base, with the general fund dropping.

“And utilities and expenses have gone up,” he said.

Dunfee said the police department operates seven days a week and is able to cover most hours of day and night, except for a few.

He said money from the levy would be used for salaries for officers. The department currently has three full-time officers and two on part time, with additional auxiliary officers.

Dunfee said if the levy does not pass, the department might be forced to cut back.