Computers are key to Hicks’ future 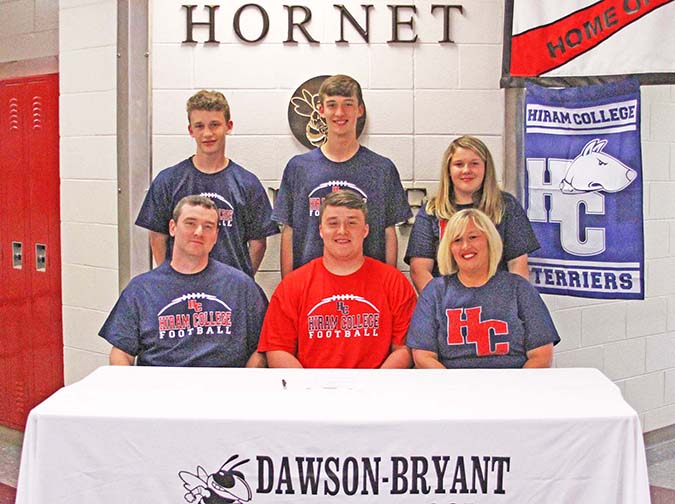 COAL GROVE — Trey Hicks plans to major in Computer Sciences. It seems computers figured into his future in more ways than one.
Thanks to colleges using the computer hookup for watching football game film on Hudl, the Coal Grove Hornets’ senior lineman is going to get the chance to play at the next level.
Hicks had been talking to several schools with the main three being Otterbein, Urbana and Hiram.
With the help of Hudl, Hicks is on his way to Hiram after signing a letter-of-intent Friday.
“Hiram was the only one that was comfortable for me after the visit,” said Hicks. “They saw me on Hudl and they liked what they saw.”
The 6-foot-2, 300-pound Hicks was a key factor in the Hornets’ line as they went 11-2, won the Ohio Valley Conference title and reached the Division VI regional finals.
Hicks is being recruited for the offensive line although he wouldn’t object to going on the defensive side, either.
“They want me to play offensive line. Any position in the offensive line. It’s just my size,” said Hicks. “My favorite is defense, but I’m definitely better offensively.”
Coal Grove coach Evan Ferguson has no reservations about Hicks being able to contribute at Hiram.
“Trey is a great football player. He’s a great senior kid who really just took charge out on the football field and played hard for me play in and play out,” said Ferguson.
“His size alone and his athletic ability will let him excel at the next level. He’s a big kid but he can move well. The coaches will be happy with him.”
Hicks said the chance to play will hinge on his work ethic.
“I just need to work. I just need hard work and getting in the gym every day, practicing,” said Hicks.
“I need to get stronger, but it’s not just about work, it’s not anything about speed. I have OK speed. I just need to get stronger.”
Adjusting to terminology will be the main thing on offense for Hicks. He said Hiram’s style should be an easier adjustment.
“(Hiram’s offense) is pretty similar to ours. They run the ball more than they pass. It’s not run heavy, but they run a little bit more than they pass,” said Hicks.
Although Hicks is excited about playing football another four years, he said it’s not his main focus. Again, it’s that computer stuff.
“I want to play all four years, but it’s not really about football. It’s about furthering your education. Football is extra on top of that,” he said.