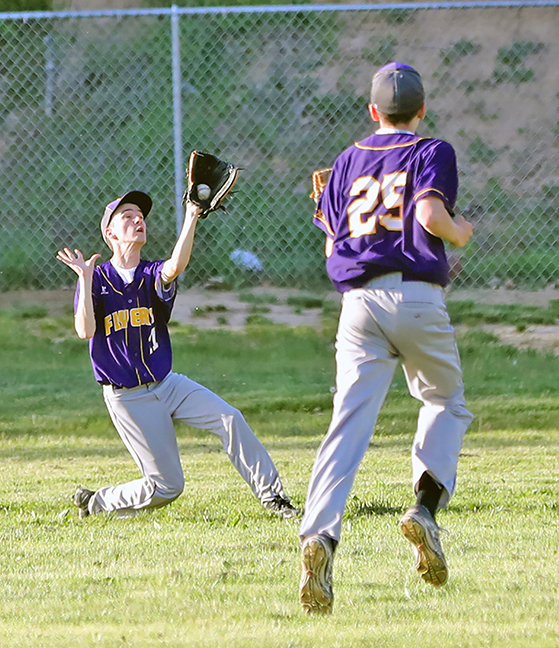 LATHAM — Have Bat, Will Travel.
St. Joseph held its prom on Friday night and had an 11 a.m. sectional tournament game scheduled on Saturday.
Rain made the Flyers’ field unplayable, so the game was moved to Latham Western.
The long two days may have taken its toll on the Flyers early in the game, but it wasn’t enough to prevent them from beating the Western Indians 11-1 in five innings.
Chase Walters pitched a three-hitter to get the win. He struck out nine and walked only one.
“Chase Walters threw a good game. He was around the plate and threw strikes and any time you do that you’ve got a chance to win,” said Flyers’ coach Greg Bryant.
“We got off to a slow start offensively, but once we got started we cascaded up and down the lineup.”
The game was scoreless until the bottom of the third when St. Joseph took a 3-0 lead.
Max Weber was hit by a pitch and Clay Willis singled him to third. Willis went to second on the return throw from the outfield and Isaac Whaley grounded out for a run.
Walters was safe on an error for a run, Trae Crabtree walked and Jimmy Mahlmeister reached on an error for the third run.
St. Joseph (15-3) blew the game open with eight runs in the fourth.
Chase Wilds and Weber singled to start the inning, Jackson Rowe put down a sacrifice, Willis walked to load the bases and Whaley got an RBI single.
Walters singled in Willis and pinch-runner Bryson Canter and then Crabtree singled in Whaley.
Mahlmeister had a two-run single but got caught stealing. J.C. Damron singled, Wilds was hit by a pitch and Weber had a two-run single.
Weber was 2-2 as eight different Flyers had hits.
“Max had a big game. He got the third inning started and had a big hit in the fourth. He’s been improving all season,” said Bryant.
The Flyers play at 5 p.m. on Tuesday at Green in the sectional finals.
Western 000 01 = 1 3 2
St. Joseph 003 8x = 11 9 3
Dustin Branscomb, Mosely (4) and Tackett. Chase Walters and Jackson Rowe. W-Walters (K-9, BB-1, ER-0). L-Branscomb. Hitting-LW: Mosely 1-3 2B, Shane Tackett 1-2 2B, Theabold 1-2; St. Joe: Max Weber 2-2, Trae Crabtree 1-1, Clay Willis 1-2, Jimmy Mahlmeister 1-2, Chase Wilds 1-2, Isaac Whaley 1-3, Chase Walters 1-3, J.C. Damron 1-3.

CINCINNATI (AP) — Eugenio Suarez surprised everyone by missing only 16 games because of a broken right thumb. His hitting... read more