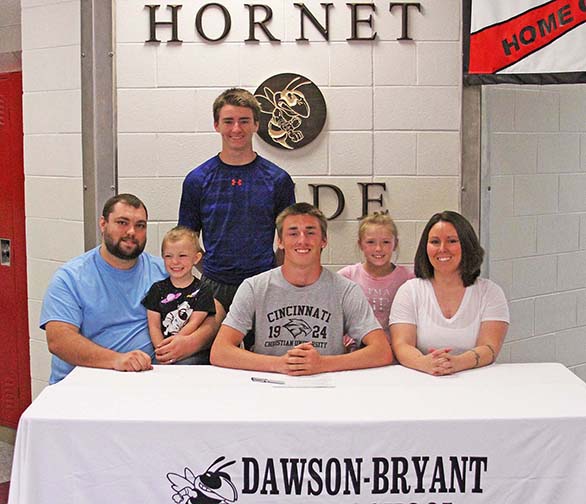 COAL GROVE — Even though Joey Workman kept thinking about football, he finally jumped past the idea of playing that sport in college.
Instead, the Coal Grove Hornets talented senior will head to college for track.
“I’ll always love football more. You get to go out and hit people. But track is always fun,” said Workman.
“But I still love football.”
Workman talked to Otterbein and Cincinnati Christian about football and track. Huntington University in Indiana doesn’t have football and only recruited him for track.
After sifting through the offers, Workman decided to sign a letter-of-intent with Cincinnati Christian University on Friday.
“With all the schools they had football but Huntington. With Otterbein and CCU, I talked to them about football and track, but I just want to focus on track for the most part,” said Workman.
Besides the high jump, Workman runs relays and this season picked up the 300-meter hurdles.
Despite his versatility in high school, Workman said he’ll be delegated strictly to the high jump at CCU.
“They’ve got their own recruits to do that who are faster than me. I’m just there to jump for them,” said Workman.
CCU offers a unique opportunity for Workman. This is the first season the school will have track which brings him into their first recruiting class.
“It’s pretty awesome that they came to me to jump for them the first season. That’s pretty cool,” he said.
Hornets’ track coach Blaine Fuller thinks the high jump is a metaphor for Workman’s potential. It can only go up.
“The sky’s the limit for Joey. He’s a really special kid who really works hard. He’s four-tenths off the school record in the 300 hurdles. He’s high jumped 6-foot-4, so I think he can get up to 6-6, 6-7, maybe higher,” said Fuller.
“They’re going to have him high jump, specialize in that. He’s a really good sprinter, especially a 400-runner, 300-runner. He’s a really good kid.”
Coal Grove football coach Evan Ferguson said Workman has all the tools needed to be successful at the college level.
“He’s just an amazing athlete. He’s a great runner, but he’s a great high jumper. He’s going to score a lot of points for their track team the next four years. This is a great opportunity for him to go on and play a sport he’s really good at,” said Ferguson.
Workman has his sights set high for the college level.
“My ultimate goal is 6-10, but for this season my PR (personal record) is 6-4 and I can probably go 6-6. That’s my goal this year,” Workman said.
With the Hornets’ track team, Workman will get the opportunity to do more than high jump and he’s hoping the team will take another step and reached the state meet.
“I’ve made it to the regional finals in the 4×4 and 4×1, but we haven’t made it to the state. I ran the 300 hurdles this year and found out I was pretty good at those. The other day I almost beat the school record, so hopefully, I can go pretty far in those as well,” said Workman.
Workman plays to major in Psychology.

Ironton Lady Fighting Tigers’ Rylie Vaughn (right) is safe at second base thanks to a high throw. (Photo Courtesy of... read more