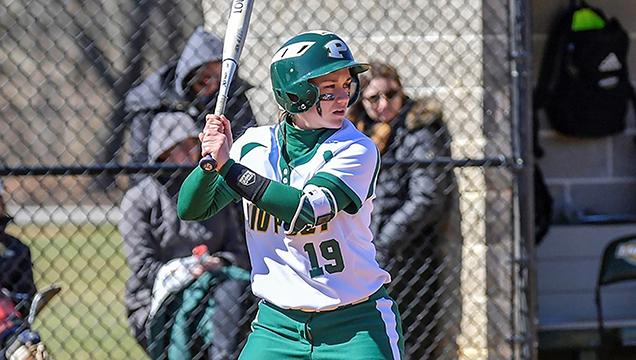 WEST BABYLON, N.Y. — There is an adjustment period from high school to college athletics. Bre Klaiber must have taken a speed-up course.
The freshman softball player seemed to have little trouble adjusting to the college game as put together an award-winning rookie season.
Klaiber was named to the All-East Coast Conference first team at third base and walked away with the league’s Rookie of the Year award for the Pioneers who also wrapped up the ECC conference title on Saturday.
Long Island University Post’s Jamie Apicella was the Coach of the Year, outfielder Abbey Fortin the Player of the Year and Katie Humhej the Pitcher of the Year.
Besides those three players on the first team, LIU also had pitcher Hannah Olshevski on the second team.
Klaiber is the third straight Rookie of the Year winner for the Pioneers. Fortin won the honor last season.
In her rookie season, Klaiber batted .401 that included 61 hits. She had an on-base percentage of .462 and .586 slugging percentage as she belted five home runs to go with 13 doubles and 34 runs batted in.
“It’s been amazing. I couldn’t ask for a better coaching staff and group of girls,” said Klaiber. “Going away from home, being 11 hours from my family, they helped me settle in and all I had to do was just step on the field and worry about softball.”
Helping make the off-the-field adjustment was her roommate and teammate Hannah Kinkelstein who is from British Columbia, Canada.
“My roommate is from Canada so we both worked through it. I’m from Ohio and have the only accent on the team. They love to pick on the accent. They swore up and down I wasn’t from Ohio. But it was all in good fun,” said Klaiber.
Fortin is also from Canada and Klaiber said she was very helpful on the field and at the plate.
“All the girls definitely were a big help, especially her. Abby is Vancouver and she had to go through that. She was a big role model,” said Klaiber.
One thing that helped her relax and get better focused on playing was a player-coach meeting just before winter break.
“We had meetings before winter break. (Apicella) said I expect you to start this year and be in the middle of our lineup,” said Klaiber.
“I got to prepare myself for that. The coaches made sure we were in mid-season form to start the season.”
Klaiber was somewhat awestruck with winning the Rookie of the Year award. She really didn’t expect the honor to come her way.
“I didn’t know what to think. Honestly, I have to give everything to my coaches and teammates. There were a lot of girls who could have won (the rookie award). It just takes a lot of work in the offseason,” said Klaiber who tipped her cap to a Pioneer coach for putting her through some extra workouts.
“Assistant coach Lou Vanacore worked with me. I broke a finger last year I wasn’t sure what to expect. We just worked on fundamentals. I couldn’t have done it without him.”
In the ECC tournament championship game, Klaiber was hit by a pitch that led to a run and she hit a two-run double as the Pioneers beat Molloy 4-1 in the championship game.
Klaiber said winning the ECC tournament and earning an NCAA Division II
That was huge. We set goals beginning of the year. Every single practice was to get something done every single day. We knew who we were playing and what we had to do. We can check that off and move to the regionals. The goal is not to come home until June,” said Klaiber.
Bre is the daughter of Bill and Melissa Klaiber of Ironton.