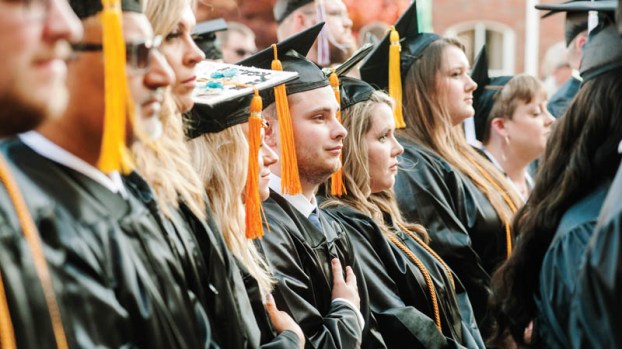 Graduates stand at attention during the start of the Graduate Recognition Program at Ohio University Southern on Thursday.

Judge talks of the importance of perseverance

Nicole Pennington, dean of the Southern Campus, welcomed some 300 guests to the 38th spring graduation ceremony.

He started going to OUS when he was a senior at Ironton High School. After graduating in 1995, he went to OU Athens, until he transferred to Marshall University in 1996 for his bachelor’s degree and to be closer to home.

Coming from a blue collar background, he was the first in his family to attend college. His grandfather and mother both worked at AK Steel.

“They instilled, from a very early age, in me the value of an education,” Ballard said, adding his mother refused to get him a summer job at the factory because she was afraid if he made good wages at the plant, he would buy a car or something else he couldn’t afford and then drop out of college and just work at the factory to make payments.

Instead, he worked as a clerk and at Walmart.

He said he breezed through high school and undergraduate school, making good grades without learning how to really study.

After graduating with a journalism degree, he couldn’t find a job in the field, despite distinctions and being near the top of his class. He said his first dose of adult reality was that the jobs he was offered paid less than what his mother was making without a college degree.

He decided to apply to UK College of Law because “How hard could it be? The lawyers on TV made it looking really, really easy.”

His second dose of reality was when he found out he had been put on a waiting list.

He later got a call saying he was in and was shocked when he he got to campus to find himself surround by 138,000 of the smartest kids he had ever met.

Many were from Ivy League schools and had parents who were already lawyers.

He found his self image shattered and it took him two years to buckle down and learn how to really study and grasp all the concepts of the law.

After graduation in 2003, he got a job with the Huntington law firm of Campbell Woods PLLC and he was told it would take seven years to make partner. He took all the cases he could to gain experience, even if other attorneys didn’t want the case. He was invited to be a partner in just six years.

“It would have been easy to rollover and quit, but that wasn’t who I was because of my blue collar background,” Ballard said

In 2013, he was offered the opportunity to open a satellite office of the Toledo-based firm, Anzac Meeks Ellenberger LLP and become a partner.

He said he was ridiculed but using the same perseverance and determination that he used to build up his law firm. “It paid off in the long run,” he said.

“Alumni like Brent Pyles show the spirit of leadership and community service we strive to impart to our students,” Pennington said.
Pyles went to OU when it was still having college-level classes in the Ironton High School. He graduated in 1976 with a bachelor’s of business administration degree. He retired as the director of human resources for Becker Mining America Inc. in 2017. He was a member of the Ironton City Council, is active in the Lion’s Club and has spent years working with the Ironton-Lawrence County Memorial Day Parade Committee and is the 2018 grand marshal.

He said that, when he graduated from the school 42 years ago, he never thought he would get such an honor.

“But it is because of what I learned here at Ohio University that I got here tonight,” he said, adding that he has leaned on what he learned at OU became the foundation of his whole life. “I got a class A education and I believe sincerely that this campus is a jewel in our community, one that for a lot of people remains undiscovered.”