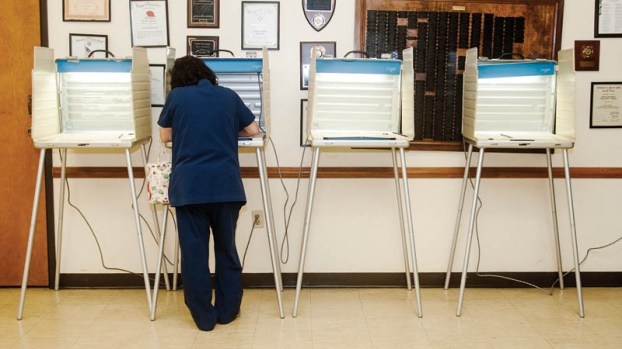 An Ironton resident votes early Tuesday morning at the Ironton VFW Post 8850. By 9:30 a.m. only 41 people voted in the South Ironton area.

Absentee voting was down for Tuesday’s Primary election in Lawrence County.

“Roughly, we have over 1,000. It’s low,” said Toni Trosper, the deputy director of the Lawrence County Board of Elections. The board won’t know how many absentee ballots there are until after a count was done on Tuesday night after the polls closed.

“We don’t know what happened,” she said. “We usually have a higher turnout than that.”

The number of absentee ballots cast usually runs between 2,000-4,000, depending on what type of election it is. Primary elections generally have the lowest number of voting in general. The highest number of votes is during presidential election years.

In the 2014 Primary Election, 3,662 people voted by absentee ballot in the county.

Trosper said she had visited some polling stations earlier in the day.

“It looks like there were around from 85-110 people at the polls, these were multi-precinct locations,” she said. “So I guess that is around normal turnout at the polls for a primary.”

There will be a full list of Primary Election results in Thursday’s edition of The Tribune.