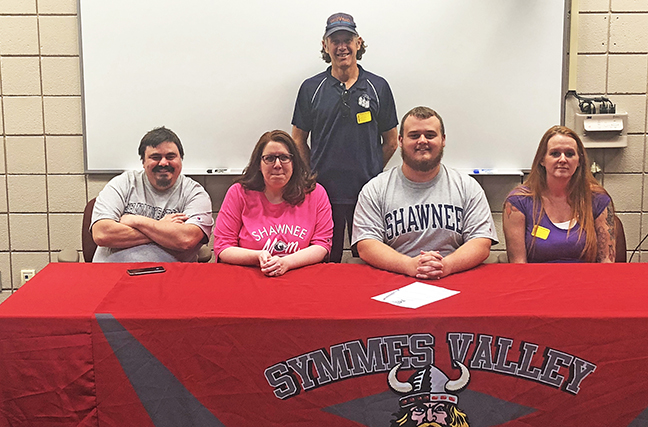 WILLOW WOOD — Learning at the college level will be a new experience for Ethan Stapleton. So will his athletic career.
Much like academics, the Symmes Valley Vikings’ senior football lineman is finding a new athletic venue he has never experienced.
Stapleton has signed with the Shawnee State Bears to be part of …. the track team.
Symmes Valley does not have a track program, but that didn’t deter the 6-foot, 280-pounder from taking on a new challenge.
“I’ve always been very strong. Everyone tells me that. I’ve always lifted weights. When the track coach saw my (football) Hudl (video) and saw what I could do, he took the chance and I took the chance,” said Stapleton.
“I’ve been getting better. We have a track coach who lives in Ironton (John Pemberton) who is helping with the shot put and hammer.”
Shawnee State head coach Eric Putnam said he sees a lot of potential in Stapleton.
“We asked him about throwing. He hasn’t had the chance to do that (in high school), but he has an interest in it. And with his size and strength,” said Putnam.
“I feel like with John Pemberton coaching our throws now, he’s so outstanding, I feel he can make something out of (Stapleton). The bottom line is we’ve got a degree he wants and he’s really strong academically. So, let’s give it a shot.”
Stapleton was a starting lineman for the Vikings’ football team and helped them to a 6-4 season. He loves football and gives credit to the sport for opening the door to a new opportunity.
“Football played a massive role. If it wasn’t for football, I’d never started lifting. I would never have been as strong as I am today,” said Stapleton who had a 305-pound bench press and 465 squat.
“I think (track is) great. I think it’s fun. I think it’s interesting. Plus, I get paid to do it now. I’m going to build, improve and I’m going to work really hard and, hopefully, get pretty good at it.”
Putnam said Stapleton will practice in the shot put, discus and hammer and see which event or events are best suited for him.
“He’s pretty excited to try it. We’ve had luck with these types of kids. They want to put all their athletic marbles into running or track and field events. I wouldn’t be surprised if he doesn’t come up with something in one of those three throwing events,” said Putnam.
Stapleton said that is lack of familiarity with the sport may actually be a benefit to him.
“Me and coach were talking and he said many guys coming out of high school are not used to the extra weight on the ball, they’re not used to how they teach the spin. But where I’ve never done it before, (Pemberton) can mold me anyway he wants,” said Stapleton.
This year marked the first season for the Shawnee State track program and he hopes Stapleton will help become a one of the building blocks.
“We’re building a team. This is the year I really feel like our roster size is getting bigger. We’re bringing in people who don’t just run,” said Putnam.
Stapleton plans to major in psychology and plans to enter law school.

Lady Tigers’ offense too much for Southeastern, 18-0