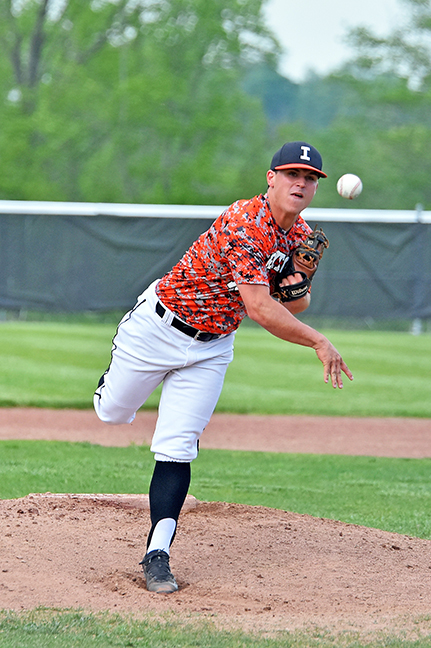 OAK HILL — Garrett Carrico isn’t a machine. He just pitched like one on Wednesday.
The Ironton senior right-hander scattered six hits, struck out five and walked one as the Fighting Tigers beat the Oak Hill Oaks 4-1 in the Division III sectional tournament.
“Garrett located his fastball well and stayed ahead of hitters from the start,” said Ironton coach Travis Wylie.
“Garrett is on a tear right now and finishing his final year strong. I think all the seniors are playing with that same mentality right now.”
Ironton (7-11) will now play at 11 a.m. on Saturday at Rock Hill in the sectional finals.
Carrico also went 2-3 at the plate along with Tanner Bowles who was 2-3 with a run batted in.
“Tanner Bowles had a good night at the plate, too. We have several guys make really good plays in the field to help out our ace,” said the Ironton coach.
Ironton jumped in front 2-0 in the first inning.
Gage Salyers led off the game with a base hit and went to second when Gage Butler’s sacrifice bunt was misplayed for an error.
After Carrico lined out, Ethan Duncan walked and Brycen Thomas hit into a force out at second base that scored Salyers. Bowles followed with an RBI single.
Oak Hill got its run in the second inning when Austin Dean singled, Hunter Lahrmer drew a one-out walk and Trevor Moore had a RBI single.
The Oaks never got a runner past first base in any other inning.
The score remained 2-1 until Ironton pushed across two more runs in the fourth.
Bowles led off the inning with a single, Joel Blankenship walked and Ayden Barnes singled to load the bases.
Cameron Deere was hit by a pitch to force home Bowles and Salyers grounded into a double play as Blankenship scored.
Jared Walls took the loss as he struck out five, walked three, gave up six hits and only two of the runs were earned.