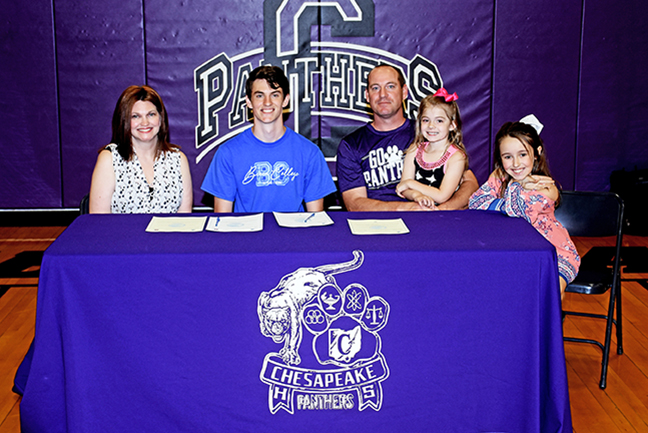 CHESAPEAKE — It might be easy to think Gabriel Johnson is getting married.
Johnson has something old (running track), something new (he’s adding cross country for the first time), something borrowed (his current training routine) and something blue (the college team colors).
The Chesapeake Panthers senior standout distance runner will put all those things together for his college career after signing a letter-of-intent on Thursday with the Berea College Mountaineers.
In this player-college wedding, it was love at first sight for Johnson.
Johnson said Rio Grande was the first school to begin talks with him, but Berea stepped into the picture and he fell in love with the school and program as soon as he stepped on the campus.
“Berea came and I didn’t want to talk to anyone else after that because I met the team when I went on a visit and I really enjoyed the campus and I really enjoyed the team,” said Johnson.
The Mountaineers are an NCAA Division III program and coached by Shawn Jakubowski. The distance coach is Darryll Patrick. They will be instrumental in deciding what events are best suited for Johnson.
“What we found out with interviews with (college) coaches is that where he’s a mid-distance to distance guy with us, at the collegiate level all those guys see him as a distance level guy,” said Panthers’ coach Tyler Marcum.
“So, his distance training is going to expatiate greatly to 60, 70 miles a week where we’re used to training maybe 20, 25 miles. He’s going to try cross country which we don’t have here, but it’s nothing he can’t handle.
“He’s a tough kid. He’s a regional qualifier the past two years in the 800-meter run. We moved him to the mile this year to get more training for when he goes to the collegiate level and make him more prepared.”
The distance running in track will get a boost from running cross country in the fall.
“I’ve never run cross country, so I don’t know how the training goes. I’d say I could do well from the start,” said Johnson.
“The coach at Berea told me I have such low mileage and I have such good times for the mileage that I’ve ran that he expects big things from me.”
With the Panthers, Johnson has a 2:03 personal best time in the 800 meters and he has posted a 4:45 in the 1600.
“I want to get my mile down to 4:20 or better, and in the 800 I’m trying to break two (minutes) and be in the high 1:40s,” said Johnson.
“I should do pretty good. I have about the same times as my teammates that are going there. They won their conference last year. They’re pretty good.”
Johnson plans to major in psychology.

Symmes Valley Lady Vikings’ catcher Ericca Ross awaits the throw and the runner in a play at home during Thursday’s... read more