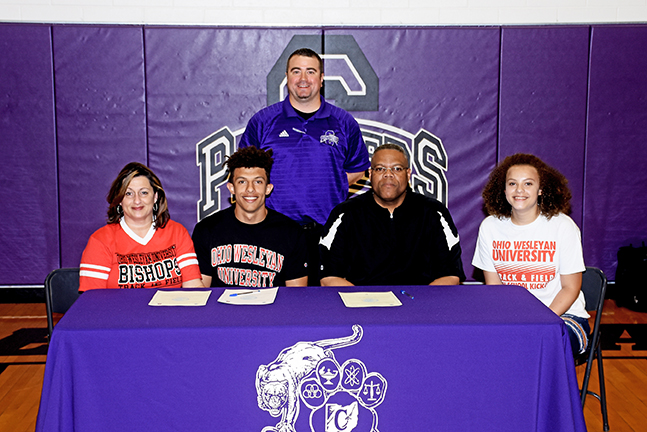 CHESAPEAKE — Injuries may have limited Cecil Fletcher’s time on the football field and the track, but it didn’t leave him in obscurity.
The Chesapeake Panthers’ senior track standout fought through all his setbacks and found a strong program interested in his talents as he signed a letter-of-intent on Thursday to run for the Ohio Wesleyan Battling Bishops.
Fletcher qualified for the state track meet in both his freshman and sophomore seasons. But a football injury left him sidelined his junior year and he made it back in time for the postseason tournament and did reach the regional meet.
Another football injury cut his season short and a hamstring injury during the winter track season delayed this spring’s track meet schedule.
The injuries and lack of exposure had colleges looking elsewhere for talent except for a few schools including Ohio Wesleyan University and head coach Kris Boey.
“I don’t hesitate to say that Ohio Wesleyan got a steal when they got this caliber of athlete,” said Chesapeake coach Tyler Marcum.
Fletcher said he talked with Boey about his recent hamstring injury and asked what treatment he needed to do such as stretching and strengthening.
“He said that I should be good for next year and to just get healthy as quick as I can,” said Fletcher who was All-Ohio in football as a sophomore.
Ohio Wesleyan was the first school to show a real interest in Fletcher and it didn’t take long for him to choose the school as his future destination.
“The first visit I went on and from the first visit it felt like home. I really liked the community. I ate with the track team and that was pretty cool. I got to meet the guys and we started talking and I thought it would be a good fit,” said Fletcher who also visited Shawnee State.
Most of Fletcher’s success with the Panthers has been in the 400-meter dash and he said the event will be his main focus at the college level.
However, Fletcher said he won’t be limited to one event.
“I’m going to get my 100 times downs and probably long jump if I can,” said Fletcher.
Being a standout in high school does not guarantee anything in college and Fletcher if fully aware that he has a lot of work ahead of him.
“They have a pretty good team already, so there’s definitely going to be some competition. I’m not going to say I’ll just step in and be the man,” said Fletcher whose father Cecil was an outstanding defensive lineman for Marshall University.
“But I’m going to work hard, they’re going to work hard, it just depends on how everyone develops and we’ll see what happens.”
Marcum said if the deciding factors regarding Fletcher’s success are hard work and character, it shouldn’t be a problem for him.
“He’s going to an asset to Ohio Wesleyan when he goes there. His work ethic and training is second to none. He’s going to do well in the sprinting events and he’s also going to be a great ambassador for our school and for their school,” said Marcum.
“In the class room he has a 3.8 GPA. The last four years we’ve seen what he can do on the field and on the track. We’re really looking forward to what he has in the future.”
Fletcher plans to major in computer science.