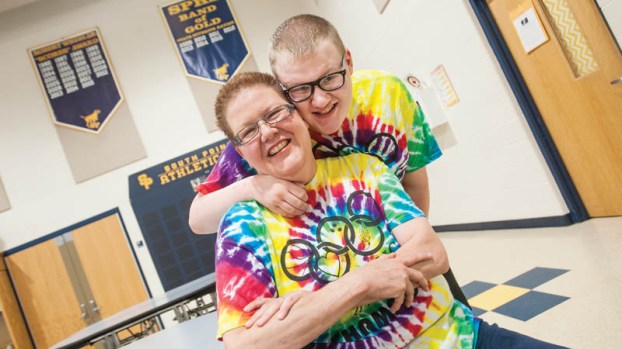 Sonya Beckett is the mother of Alex Beckett, 19, a student at Open Door School in Ironton.

Mother’s Day is set aside each year to honor and show appreciation for mothers and all that they do.

Parents have much to take on as their children grow and, for those who have children with special needs, it can be more challenging.

Alex was diagnosed with autism at the age of four and is the middle child of three she has raised.

Beckett said a key to helping others understand Alex is to stress patience.

“You have to teach them to have patience,” she said of how she imparted advice to her other two children. “He does things differently.”

She said it is important to follow routines as a family and keep things familiar.

“You have to keep a schedule,” she said. “You tell them that, if he goes off a schedule, it’s not easy for him.”

Sonya serves as the secretary of the Autism Program of Lawrence County, now in its second year, since branching off a group in Scioto County.

“We’re a 501 (c) (3) organization,” she said of the organization, which meets monthly. “We bring parents in to talk and tell them of services available.”

She said one topic that gets discussed frequently is guardian information, a concern as parents and children grow older.

Sonya faced another challenge several years ago when her daughter, Megan Foltz, was diagnosed with leukemia. After two bouts of cancer, Megan made headlines when she retuned to her school in a limousine following treatments.

Now 14, she is set to begin high school in the fall.

“She just had her five-year remission anniversary,” Sonya said.

While Sonya says services for parents of special needs children “could always be better,” she said they have improved greatly since Alex’s diagnosis.

“There are definitely more support groups,” she said. She also said there are more sports available to children, such as the Challenger League at Open Door, where Alex plays basketball.

Ronda Imes, of Pedro, is the mother of Sierra Imes, who is also diagnosed with autism.

“Basically, you do what you need to do,” she said of meeting her needs.

She said that Rock Hill schools, where Sierra attends, have been especially helpful with addressing needs.

She and Sierra, one of five children in her family, were at the Lawrence County Special Olympics on Thursday, along with Jennifer Besco, who is both a mother to a special needs child and works as an intervention specialist at the school.

“They are really good with them,” Besco said of the school district.

Ronda said Sierra loves to fish and raises chickens through 4-H. She said that she and Besco have founded a group through 4-H for special needs families.

“There are a lot of good community resources out there,” Ronda said, adding that organizations, like Special Needs Youth Sportsmen have provided opportunities, such as camping and fishing.

“A lot of people don’t know about that,” he said.

Sonya spoke of what is involved in preparing her son for adulthood. She said Open Door School has offered work opportunities for Alex, with him taking a job at Bob Evans, as well as Bartram’s grocery in Ironton.

He has also worked at the Early Childhood Center, she said.

“He’s a big reader, and he loves kids and working with kids,” Sonya said. “He’s been able to read since preschool. That’s his gift.”

She said he also teaches Bible stories to younger children at their church.

Socialization is an important part of his education, she said.

“We try to keep him very involved in the community,” she said.

Students at Open Door typically graduate at the age of 21, but, due to how his birth date fell, Alex has the option of remaining in school until 22.

As for when he wants to graduate and join the workforce, Sonya said it is up to him.

“We’re going to let him make that decision himself,” she said.