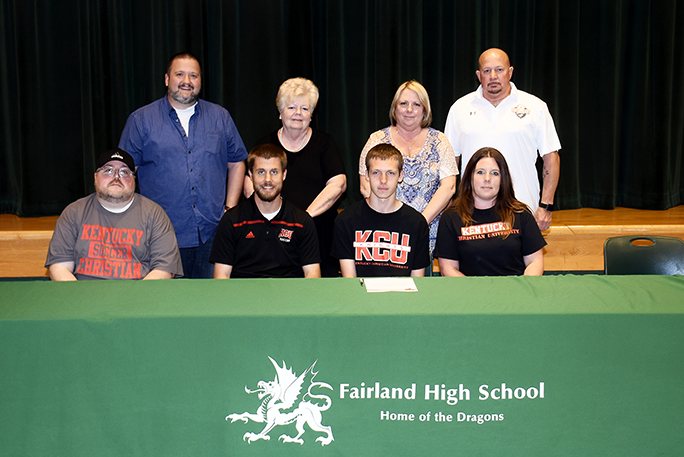 PROCTORVILLE — Not even Emeril Lagasse could put together the recipe Tyler Webb wanted.
The Fairland Dragons’ senior soccer standout wanted to mix education with athletics and religion. Webb look at Shawnee State and Ohio Christian, but when he visited Kentucky Christian it just went Bam!
“It was more of a home feel when I went on their campus. It just felt right. Being a Christian school) plays a big factor. I attend church multiple days a week. It’s just a big part of my life,” said Webb who spends his free time with family, friends and going to church on multiple nights.
Webb signed a letter-of-intent on Tuesday to play for the Knights and will continue to play a sport he began nearly 18 years ago.
“I’ve been playing soccer since I was two. I just like the fast pace and a little bit of contact. It just feels right,” said Webb.
That “little bit of contact” proved a little bit of detrimental to Webb. He missed senior night because he broke his nose and had to have surgery.
“The ball was going over top of me so I turned to start running and I jumped to head the ball over the defensive player and his forehead got my nose,” said Webb.
The signing with KCU marks the program’s first player to get the chance to play at the college level. Webb was humbled by the fact.
“I feel very accomplished to be the first one because I came in as a freshman playing with seniors. I expected someone ahead of me to sign but none of them decided to play soccer (at the collegiate level),” said Webb.
“Since freshman year, once I started actually working, I wanted to play at the next level so I’ve been pushing myself to play at the next level. I just need to keep working on fundamentals and keep up what I’m doing now.”
Veteran KCU coach Jeremy Miller recognized Webb’s ability during a campus visit and pursued the Fairland senior.
“He came over for a campus visit and practiced with the team. A few things I like about him is he’s a hard worker and a good character kid,” said Miller.
“Most of my guys I like to play multiple positions. I’m looking for to just get him on the wing somewhere, probably in the midfield somewhere. That’s probably where he’ll start as a freshman.”
Webb said he has played every position but goalkeeper. However, he admitted that “I prefer the offensive side.”
Miller said Webb isn’t guaranteed any playing time, but he does have high expectations.
“It depends on how the freshmen do during the summer and how they come into the season. College is always the big tale sometimes. But I have expectations for him to contribute as a freshman,” said Miller.
“Freshmen have contributed to the team since I’ve been there and it should continue this year.”
Webb said getting to the next level wasn’t something he’s done on his own. His parents — Jeff Webb and Nicole Doss and stepfather Joey Doss — have been instrumental off the field while others have helped on the field.
“Other players have pushed me a lot and my old coach Eric Fisher,” said Webb.
KCU has been to the national tournament two of the past three seasons and finished among the top five this year.
Miller said he recruits certain types of players for the program.
“What I look for is someone who is good character and good fit and understands what a Christian university looks like. It makes it a lot easier to build a team and a family and that’s what we’ve done at Kentucky Christian,” said Miller.
Webb plans to major in business management.

Suns get No. 1 pick in NBA draft