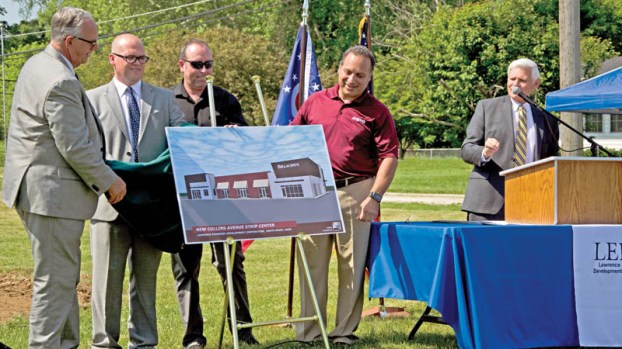 Members of the Lawrence County Economic Development Corporation unveil the building design for the new Bellacino’s Pizza and Grinders on Collins Avenue in South Point.

The franchise, the third in the area, after locations in Barboursville and Ashland, will be located on Collins Avenue next to the Lawrence County Chamber of Commerce.

It is the first business to be announced for the 9,000-square foot strip mall being built at the shop, Rick Slack, of the LEDC board, said.

Slack said the vision for the strip mall began about 12 years ago.

“This is symbolic of many great things coming for the community of South Point and Lawrence County,” he said of the $1 million investment in the site. “It will be a great benefit to the community and The Point and will give employees here an optimal place to dine.”

Bill Pratt, president of the Lawrence County Commission, was on hand with fellow commissioner DeAnna Holliday.

He said the strip mall will coincide with the construction of a new roundabout interchange for nearby Solida Road and U.S. Route 52, which he credited Holliday with championing.

Pratt said the location, visible from U.S. 52, will be optimal for the restaurant.

“This is a busy stretch of highway,” he said. “And you have the largest school district, the largest high school, The Point and the STEM school close by.”

“You won’t have to go to Ashland now,” he said. “You can come to South Point for that good food.”

“We are pleased to have Bellacino’s with us here in South Point,” he said. I hope our relationship is long and profitable.”

Richard Mickel, the franchise owner, said he opened his first location in Barboursville in 2011, then expanded to Kentucky in 2015.

He described the restaurant as “fast casual” with dine-in and carry out options, and said it would employ 20-30 people when it opens and will seat about 50 customers.

“Generation after generation, then they finally franchised,” he said. “The bread is outstanding.

We got the secret recipes and I think you’ll enjoy the location.”