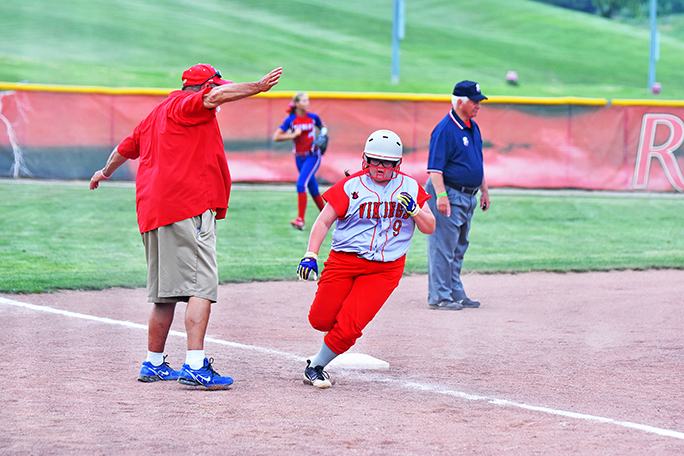 RIO GRANDE — This was a game that just didn’t seem to want the Symmes Valley Lady Vikings to finish.
The Division IV district semifinal game between the Lady Vikings and Peebles Lady Indians began on Tuesday but was suspended in the top of the fourth inning due to the weather.
That inability to finish plagued the Lady Vikings at the plate as well in a 6-4 loss to Peebles as the game was completed on Wednesday.
Symmes Valley left the bases loaded in the third inning, had runners at second and third base in the fourth, and runners at first and second in the fifth and sixth innings but failed to score.
“We pounded the ball. We just couldn’t get a clutch hit,” said Lady Vikings’ coach Jeff “Odie” Estep.
“But our kids fought to the end. I can’t fault our effort. They never lost confidence they could win.”
Peebles took a 3-0 lead in the top of the first inning.
Brycelyn Short, Madison Pierce and Kylie Sims all walked and Christian Reed tripled to clear the bases.
Peebles went up 4-0 in the top of the second when Matti Nichols singled, moved up on a sacrifice bunt and Hailey Moore doubled.
Symmes Valley scored all its runs in the bottom of the second inning to tie the game.
Emily Estep walked, Kelsey Gothard singled and Hailee Littlejohn tripled home both runners.
Sarah Kingery singled home Littlejohn, stole second and Morgan Jenkins followed with an RBI single.
The Lady Indians got what proved to be the winnings runs in the fourth.
Short reached on an error, Moore singled and Pierce hit into a fielder’s choice.
Sims walked to load the bases and McKenzie Swango hit a sacrifice fly. Moore scored on a ground out to second base.
Kingery was 3-3 with a double as the Lady Vikings had eight hits.
The Lady Vikings — who lose seniors Taylor Webb and Frankie Hunter — finished the season 17-9.
Peebles plays Portsmouth Clay at 11 a.m. Saturday in the district finals. Clay blanked Belpre 8-0.
Peebles 310 200 0 = 6 10 1
Sym. Valley 040 000 0 = 4 8 1
Madison Pierce and Kylie Sims. Sarah Kingery and Ericca Ross. W-Pierce (K-6, BB-3, IBB-1). L-Kingery (K-3, BB-4, ER-3). Hitting-PHS: Hailey Moore 2-4 2B, Christian Reed 2-4 3B, Matti Nichols 2-4, Josie Myers 1-4, Jerilin Toller 1-3, Madison Pierce 1-3, Brycelyn Short 1-3; SV: Sarah Kingery 3-3 2B, Morgan Jenkins 1-4, Rachael Hayes 1-4, Kelsey Gothard 1-3 2B, Hailee Littlejohn 1-3 3B, Emily Sharp 1-3.

Jim Walker jim.walker@irontontribune.com CHILLICOTHE — And now there are two. With mostly running preliminaries and a handful of field events,... read more