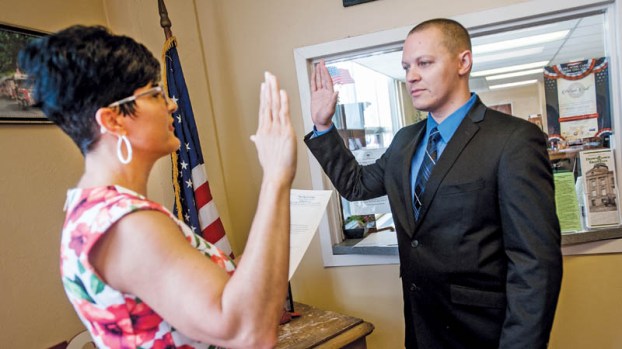 On Thursday morning, Joseph Lewis fulfilled his lifelong dream as he was sworn in as an officer with the Ironton Police Department.

He was sworn in by Ironton Mayor Katrina Keith in front of family, fellow officers and Judge Kevin Waldo.

Lewis said that he has worked towards being an Ironton police officer for a long time.

He graduated from Collins Career Center’s Adult Police Academy in 2004 with a certificate in criminal justice and got his Ohio peace officer certification and continued training even as he worked at other jobs, including the last eight years at Mended Reeds.

“I worked very hard for this,” he said. “I am going to do the best job I can for the City of Ironton and be an example for people to look up to.”

He said that he wants to be an officer that people are not afraid of and that they know  he will treat everyone with respect.

His said his wife, Kathy, was always part of his drive to be a law officer.

“She is the rock behind me,” he said. “Any time I am about to slip, she gets me back on the straight and narrow.”

Lewis said that his bosses always knew his goal and supported his efforts.

One of his bosses, Gary Glover with Mended Reeds, was in attendance to see Lewis sworn in and was happy to see him achieve his goal.

Glover said he was sad to lose him.

“When they called and asked me about him, I said ‘I hate to see him go but he deserves it,’” Glover said. “He’s worked hard for this. Ever since he worked for me, his drive was to be an Ironton Police officer.”

“We think he is going to be a good fit. He is a very intelligent, family-orientated, God-fearing man,” she said. “We really look forward to great things from Patrolman Lewis.”

Lewis will begin patrol on Monday afternoon with Captain Johnson as his field-training officer.

Police urge drivers to buckle up