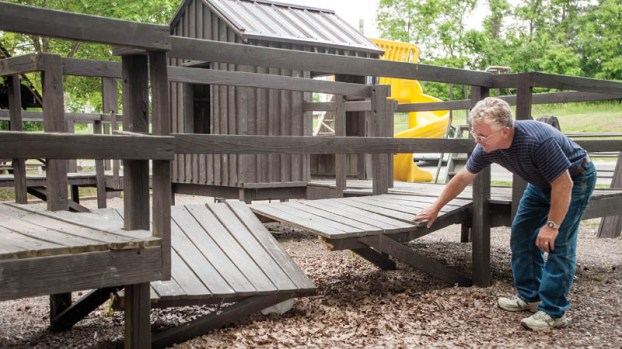 Mayor Larry McDaniel surveys the damage caused by vandals Thursday morning at Paul Porter Park in Coal Grove. This is the second time in two weeks that the park has been vandalized.

COAL GROVE — Vandals have struck the Paul Porter Park in Coal Grove for the second time in a week and left people mad.

“I’ve been the village administrator for 29 years and I’ve never seen anything like this,” said Chuck McKnight, adding that they had just started building the park when he took office and that many people have worked very hard to make it a place for people to gather.

“It’s a nice place for people to gather, to come and eat lunch, for kids to play,” he said. “It just seems like in the past two years, it just seems like someone is trying to tear this place apart.”

The vandal or vandals struck overnight on Wednesday. McKnight said they wrote on the buildings with chalk, tore down some of the children’s swings and worse.

“I just now cleaned out feces out of the men’s bathroom, someone dropped their pants and used the men’s urinal,” he said. “What we fix up, they tear down.”

McKnight said that if they do catch whoever is doing the vandalizing, they would make an example out of them.

“We are reviewing video footage right now,” he said. “Once we have enough, we will take it to the county prosecutor.”

He said that Mayor Larry McDaniel and his wife, Vicki, do a lot to keep the park looking nice by planting flowers and tending to the grounds.

“We have a nice park here for people to come and enjoy themselves,” McKnight said. “I and my workers take pride in this park and making it look good. We are not going to put up with this kind of stuff happening.”

ROME TOWNSHIP — The heat may have been a bit much for early May, but it still did not keep... read more