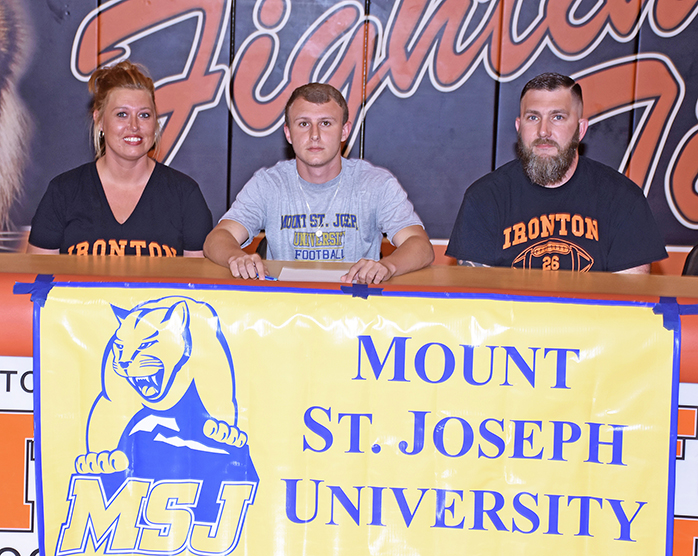 The lure of Friday Night Lights was just too much for Alex Cox to ignore.
After playing football in grade school, Cox wasn’t sure what lay ahead at the bigger levels, especially given his 5-foot-8, 155-pound frame.
But his love of football was too strong and he return for his junior season and made some impact plays during his senior year for the Ironton Fighting Tigers.
“I didn’t know how high school would be, so I took a break. I’m glad I came back. I really like football and I like being under the lights,” said Cox.
“I knew I wanted to go to college. I didn’t really think about playing at the next level, but I like football a lot and I just want something to do.”
Cox will continue his return to football at the college level as well after signing a letter-of-intent on Friday with the NCAA Division III Mount St. Joseph University Lions.
Cox said he talked with Capital University and several other Ohio colleges, but he went with Mount St. Joseph after a visit.
“I went on two visits and then I went to Mount St. Joe. Their coach (Tyler Hopperton) was constantly asking me what’s going on at school,” said Cox.
“I went up there and saw the facilities and everything was brand new. I liked the school and the environment when I was there.”
Cox was a running back with Ironton but also spent some time as a receiver, the position he’s expected to play at Mount St. Joseph.
“I’m thinking wide receiver now or slot back. I’m obviously going to have to get bigger and stronger,” said Cox. “I don’t worry about my size. You just give it all you’ve got all the time and it doesn’t matter.”
After talking with Lions’ wide receivers coach Alan Spell, the chance to play as a freshman is a possibility for Cox.
“The coach who recruited me said they have a lot leaving from last year and that if I competed hard there would definitely be a chance for me to play,” said Cox.
Getting a chance to play is a great incentive, but Cox is well aware of the difficulty freshmen have transitioning to the next level after high school.
“It’s going to be different than high schools and I’m going to have to work even hard than what I did last year,” said Cox.
“I expect it to be more competitive and tougher. The kids and the coaching will be tougher. It’s just going to be more work.”
Cox plans to major in business administration.