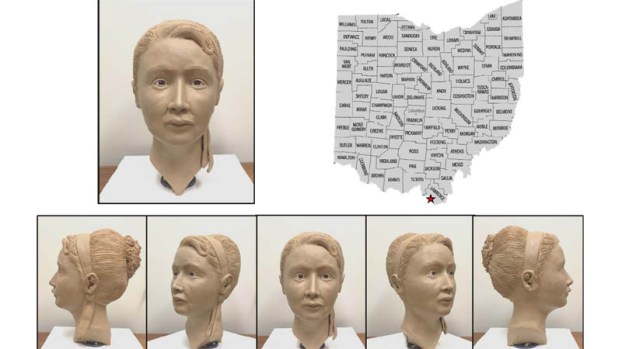 Law enforcement continues to seek leads in a decades-old murder case in which the unknown female victim is referred to as the “Belle in the Well.” The 1981 murder case has many clues, but has had no answers yet.

On Friday, Ohio Attorney General Mike DeWine and Lawrence County Coroner Benjamin Mack, M.D. unveiled a new forensic facial reconstruction of a woman whose remains were found in a cistern in the spring of 1981.

“Despite many efforts to identify this woman over the years, she is still without a name,” DeWine said. “We hope that this forensic facial reconstruction will trigger someone’s memory of a friend or loved one who hasn’t been heard from for decades.  Finding out who this victim was is the first step toward finding out who killed her.”

Anyone with information on who this person may be is urged to contact BCI’s Criminal Intelligence Unit at 740-845-2406.

On April 22, 1981, the remains of a woman were found by a couple of young teenage girls. They were playing by a cistern near Dobbstown in Windsor Township and dragged the concrete lid off to peek inside. They found a body and ran to tell their father who called the sheriff’s office.

A local fire department used a saw to cut the concrete slab off so the water could be drained out. Concrete blocks had been tied to the woman with pantyhose to weigh the body down.

There was no wallet and no identity card. There was a three-year-old bus ticket and a key to locker at the Huntington Greyhound station.

An autopsy was performed and it was estimated that the body could have lain in the cistern since 1979. Her neck had been broken. Her facial features were unrecognizable due to being in water so long.

Authorities estimate that the Caucasian woman was between 30 and 60 years old at the time of her death. She weighed around 140 pounds and was approximately 5’3” tall.  Her eye color and hair color are unknown. The woman was found wearing a dark pullover sweater underneath a lightweight shirt with a red cable-knit sweater on top. She was also wearing gray slacks, red socks, and a rubber band on each of her wrists.

It was assumed she was a transient because no one claimed the body. Investigators looked in the bus station locker and found a bag of clothes, some family photos and a brass coin from a Jerry Falwell revival. They interviewed people at the bus station and some remembered her as being from Arkansas. Or Alabama. She had gotten on  the bus somewhere in Tennessee.

Investigators wondered if she hadn’t gotten a ride with someone on a motorcycle since she had rubber bans around her wrists, a common thing done by people so the air doesn’t go up their sleeves as they ride.

She was buried in an unmarked grave off of Homeless Road.

In 2011, then-County Coroner Dr. Kurt Hofmann had the body exhumed to collect DNA samples. Her bag with her clothes was in the grave with her. The family photos had disintegrated after three decades.

Hoffman put the data from that autopsy into National and Missing Unidentified Persons System to see if there would be a match with any missing women listed. As of February, 241 women have been ruled out as the Jane Doe found in Lawrence County.

In April of 2012, Hoffman and Sheriff Jeff Lawless unveiled the first clay model that is supposed to give an approximate model of her face. Nothing credible ever came of the first clay bust.

Coroner Mack said the “Belle in the Well” case has lingered here in the tri-state area of Lawrence County for over three decades.

“Retired Chief Investigator Bill Nenni has been a major driving force in keeping this case alive and pursuing new avenues,” Mack said. “We strongly believe that the victim is of local Appalachian decent from Ohio, Kentucky, or West Virginia. If you have any information about her or if you have an unaccounted for family member from this time frame matching this description, we strongly ask you to reach out to us.”

One Tribune story dated May 5, 2012, gave a possible identification of the “Belle of the Well” as Sheila Gail Wears Pierce, a woman from Point Pleasant, West Virginia, who was last seen on June 24, 1978.

“Her time frame fits,” Nenni, who was the chief investigator for the coroner’s office, said in the 2012 interview. “We have looked at her before and have talked to the state police in charge of the case. She has always been someone we thought was a possibility.”

What could exclude Pierce is that she was 24 when she disappeared and investigators believe the unidentified body is of a women is much older. And the women in the cistern had missing lower teeth, a super erupted upper molar and an overbite.

“By the fact she doesn’t have those lower molars and the upper tooth is super-erupted is the reasoning we are saying she probably is older than 30 years,” Nenni said. “It is not a real exact science, but it gets us in the ball park.”

COAL GROVE — Vandals have struck the Paul Porter Park in Coal Grove for the second time in a week... read more