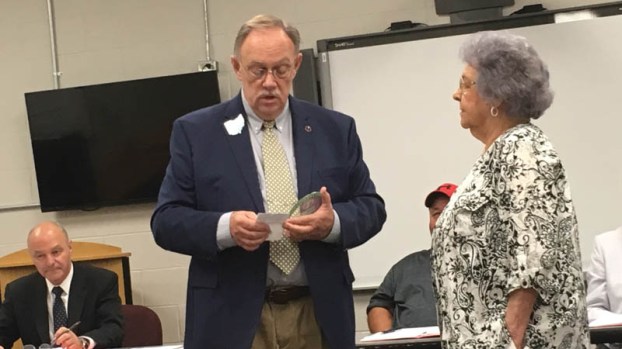 Paul Mock, of the Ohio School Board Association presents Wanda Jenkins with a glass display, honoring her for her more than three decades of service on the Rock Hill school board

Board member Jenkins, others honored at dinner

The Rock Hill school district took time on Thursday to pay tribute to several employees with a special dinner at the high school.

“We are recognizing several people who have retired in the past year,” Superintendent Wes Hairston said.

Hairston said the number of retirements were down this year, as compared to last year when 18 left the district.

“We have a mostly young staff now,” he said.

Of Jenkins, who served on the school board from 1981-2017, Hairston described her as a friend and true public servant who always was concerned of the needs of others.

Jenkins was thankful for the honor.

“I appreciate each and every one of you,” she said. “Never forget our children.”

Of Scherer, Hairston testified to her strong character and recounted how she had came to the hospital when his father had a heart attack and sat in the ICU with the family the entire night.

“You don’t forget people doing something like that,” he said.

Scherer thanked him for the plaque.

“I could tell many wonderful stories,” she said of her experience with her co-workers, then joked, “One of these days I might write a book, but change the names to protect the guilty.”

“Project Lead the Way has been great for this district,” Hairston said.

Of Parnestti, Hairston said, “She has done a great job as a teacher. She loves kids  and loved teaching.”

He described Kline as “a wonderful lady, whose done a great job,” and said of Harper, with whom Hairston graduated from high school in 1974, “He’s a good person whose going to be missed. He cared about the kids.”

Parnestti, who retired at the end of last year after just short of 32 years of employment, said she enjoyed her time working in Rock Hill’s schools.

She said she has since been “keeping very busy,” working on gardening and babysitting her 6-month-old grandson.

Scherer, who retired after 37 years, said she hopes to travel.

She first came to Rock Hill in 1983 and worked there until this past year.

“I never saw a reason to leave,” she said, expressing her fondness for the students, her co-workers and the community. “It’s just been a blessing.”

Following the dinner, Jenkins received a further honor at the district’s board meeting.

Paul Mock, of the Ohio School Board Association, presented her with a glass plaque for her service.

“What does it mean to a stay a board member for so long?” he said. “It’s passion.

Anybody in the field of education can tell you it’s a calling.”

He pointed out that Jenkins was one of the longest-serving school members in Ohio.

“God bless you in the days to come and thank you for all you did in the district and for this county’s boys and girls,” he said.

COL GROVE— Starting on June 2, the Village of Coal Grove will be flushing hydrants. There will be a town... read more